A Dominant Win For McLaughlin 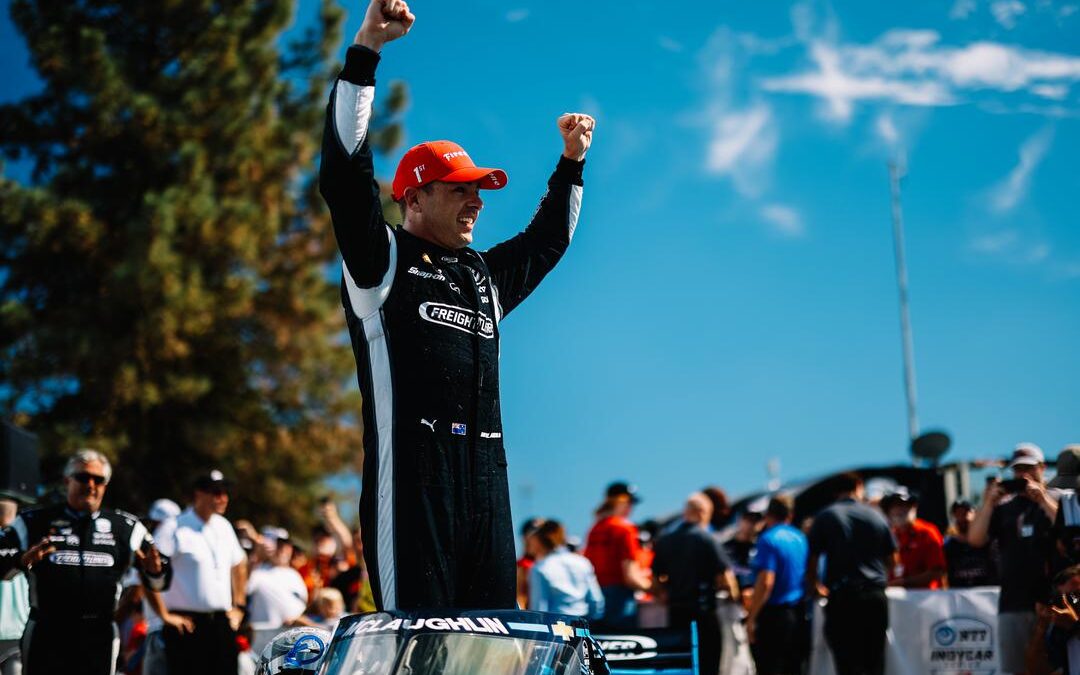 Scott McLaughlin in the No.3 Freightliner Team Penske Chevrolet took his third win of the 2022 NTT IndyCar Series in Portland on Sunday.

The New Zealander who started the race from pole dominated the 110-lap race, leading all but six laps to remain mathematically in the championship hunt.

“I don’t think the car really felt good in that first stint but as the race went on, it got a little bit worse. I just had to really concentrate on where I wanted the strengths of the car to be and work with those and make the best of the weaknesses. The Freightliner Chevy all weekend has been fast. It’s been right there where we needed. This team – the Thirsty Threes – got the job done in the pits, and I’m really proud of them. We did exactly what we needed to do this weekend, which was win and get max points to keep ourselves in the championship fight. Yeah we’re a longshot. I don’t care because we have a shot so I’m looking forward to it.

Will Power in the No.12 Verizon 5G Chevrolet wet into Sunday’s race in Portland three points ahead of Josef Newgarden.

Power came home in second place where he started the race from and goes into this weekend’s season ending Firestone Grand Prix of Monterey at WeatherTech Raceway Laguna Seca with a 20 point lead over Newgarden and Chip Ganassi Racing’s Scott Dixon.

The red (tires) were a lot better for us. The black tires just never really came on and we never really had a good balance with it. It was a tough decision because those reds had a lot of laps on them, but I still feel like we would have been quicker over the stint. It was the right move and a good move. It would have been tough on the restart without it, so it was a good call by the guys. We had good strategy all day. If (Christian) Lundgaard hadn’t gotten us at the start, we could have had a shot at Scott (Dixon). It’s another day where we did everything we could. We had a little get-together with Pato (O’Ward) so luckily that came out alright. I just want to win this championship for the guys who have been with me for more than a decade, like my engineer Dave (Faustino) and my data acquisition guy Robbie (Atkinson) and the group. It’s a lot less selfish for me this time around because they deserve it. I feel their pain over the years of losing so many. I’d love to win it for them.”

Josef Newgarden in the No.2 Hitachi Team Penske Chevrolet started the race from eighth place after a six-place grid penalty and that is where he finished the race.

The Tennessee-native is aiming to claim his third championship this weekend and has more wins than anyone this season with five victories to his name.

I think the obvious (thing) was that we didn’t predict the caution. There’s always the risk that a caution comes out in that final stint. I wasn’t thinking about that; we went green the entire race. I thought the primary tires would probably have better durability at the end. That argument holds up a little better with no caution. We just got hosed when we had to restart with all reds (around him). I was blown away at how much better everyone was on them, especially in the caution situations. That just did not play into our favor, unfortunately. It’s a hard day where we really gained nothing after a tough starting spot. We’ll regroup and take our Team Chevy car with Hitachi to Laguna and try to be fast.”