A Great Day For Herta In Long Beach 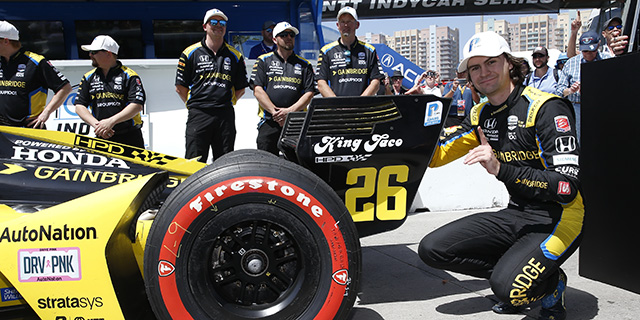 Andretti Autosport’s Colton in the No.26 Gainbridge Honda had a great qualifying for Sunday’s Acura Grand Prix of Long Beach as he starts the race from pole position having set a qualifying time of 01:05.3095s and speaking following the action he said:

“As a young kid, I always dreamed of becoming an INDYCAR driver, and that was because of this race. “To get the win last year was amazing, and we checked another box with the pole. It feels incredible.”

Herta went on to say:

“We had a great car. Yesterday was a struggle for us so we went to the drawing board and brought something completely different for today. It worked well. I was happy with our pace, obviously, we were really strong. We were able to get the tire temps up of our Firestone tires quickly and get a lap in. So now we shift our focus to tomorrow’s race.”

Alexander Rossi starts the race from fifth place and speaking following the action he said:

“It was a good day overall for Andretti. I think Colton did a great job putting the car on pole. I think we ultimately are a little out of position but fifth is still a good position for us and we can do a lot from there. I look forward to the race tomorrow.”

Romain Grosjean in the No.28 DHL Honda starts the race from sixth place and speaking following the action he said:

“I think we tried very hard. Colton was very fast today, and we were up there as well. I think I just tried too hard and it didn’t work. The good thing is that we’re sixth on the grid. That rule is hard, that you lose your position if you cause a red flag because I should be second on grid. But I also like it. I think it’s cool that if you create a red flag it’s on you. We have our work for tomorrow but it’s a long race. It’s going to be tough but Colton showed us last year that it is possible to overtake. So we’re going to go for it, but three Andretti cars in the fast six is pretty good.”

Devlin DeFrancesco starts the race from 17th with a time of 01:06.7418s and speaking following the action he said:

“Qualifying was the first clean run we had all weekend. With traffic and the red flags, we weren’t sure where we stacked up. But we knew the Andretti Steinbrenner PowerTap Honda was strong. We were on the bubble for the transfer but I snagged the wall a bit in Turn 5 and I think that hurt us from moving forward. This place is tough, it does bite, especially without previous track knowledge. But we have a lot of knowledgable people around us so we’ll be good for tomorrow.”