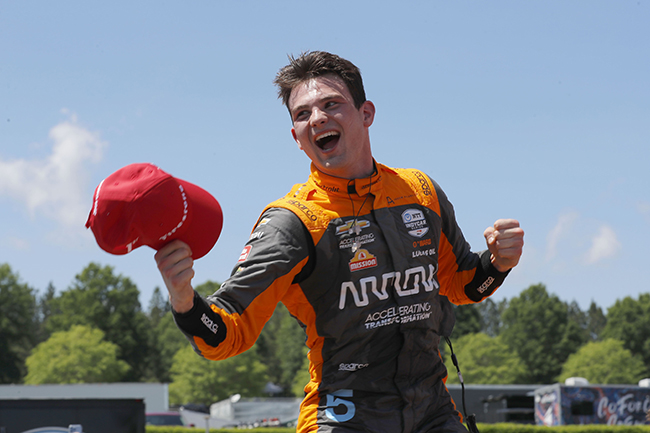 Speaking following the race, O’Ward who has moved up to fifth in the points standings commented saying:

“What a great weekend for Arrow McLaren SP. I’m really happy for myself and this team. It is great momentum for the team heading into the busiest month of the year. I love driving around Barber Motorsports Park. The No. 5 Arrow McLaren SP Chevrolet has been in the window ever since we rolled off the truck in Practice 1. We were close to pole in qualifying, but we got it done in the race. I couldn’t be more stoked for this group of people. Now, we need to go and try to rack up as many of these as we can.”

Felix Rosenqvist in the No.7 Vuse Arrow McLaren SP Chevrolet started the race from sixth place on the grid and came home in P16 and speaking following the action he said:

“It was a disappointing race. It was a really good first stint that was positive with good pace on the Firestone red tires, but then we had a miscalculation on the fuel. That made us pit way too early, and we had to save a bunch of fuel for the rest of the race. We have to analyze everything to see if our fuel numbers are correct. We were quick, but couldn’t really do anything because of the fuel situation. Congrats to Pato, that is really good for him and the team. Just wish we could’ve been there with him, but we will push to be there next time.”

“It is fantastic to leave Barber Motorsports Park with a win. This is why we do what we do. I’m very pleased with the work and effort that has been put in across the entire team to make a result like this possible.

“We show up to these events and aim to unload quick, get in the window and be able to stay at the front all weekend. This weekend it was the case and you want to take advantage of it. We did this as a team, and I’m really proud of that. Everyone has a part to play, and they deserve this result with all the work that is put in across the entire organization.

“I’m disappointed about Felix’s result, because he certainly had a strong car, but it looks like there was a fuel calculation issue and that ultimately [compromised his race] hindered his pace. It’s unfortunate but we will look into it and correct any mistakes. We head into the Month of May with good momentum and are certainly going to give Indianapolis Motor Speedway everything we’ve got.”

Arrow McLaren SP’s focus like the rest of the NTT IndyCar Series field shifts to the month of May for the GMR Grand Prix of Indianapolis and 106th running of the Indianapolis 500 presented by Gainbridge where once again, just like in 2021 they will have a third car with two-time Indianapolis 500 winner Juan Pablo Montoya returning to the team.