The McLaren Racing organization has had a phenomenal 2021 both in the NTT IndyCar Series and the FIA Formula One world championship. McLaren and Schmidt Peterson Motorsports aligned for the first time in 2019 at the Indianapolis 500 before they entered into a strategic partnership in 2020 with the team becoming Arrow McLaren SP fielding Pato O’Ward and Oliver Askew full-time in the NTT IndyCar Series while Fernando Alonso joined the team for the Indianapolis 500.

The 2020 season saw Pato O’Ward claim six podium finishes, Indianapolis 500 rookie of the year and fourth place in the championship.

The team had a breakthrough season in 2021 with Pato O’Ward once again piloting the No.5 Arrow McLaren SP Chevrolet being joined by Felix Rosenqvist who made the move across from Chip Ganassi Racing.  Pato O’Ward took two victories and three pole positions to claim third place in the championship and was in contention right up until the second last race of the year.

Over at the McLaren Technology Centre in Woking, the McLaren Formula One team made a number of big changes switching from Renault back to Mercedes power while they also saw the arrival of Daniel Ricciardo to the team from Renault to replace the Ferrari bound Carlos Sainz.

Lando Norris has been the stand-out performer of Formula One in 2021 scoring four podium finishes so far and his maiden Formula One pole position. Daniel Ricciardo also had a breakthrough race in Monza where he led a McLaren 1-2 finish giving the Woking-based outfit their first victory since Jenson Button won in Brazil in 2012. 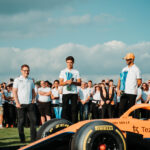 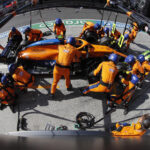