A Pretty Good Day For Arrow McLaren SP In Portland 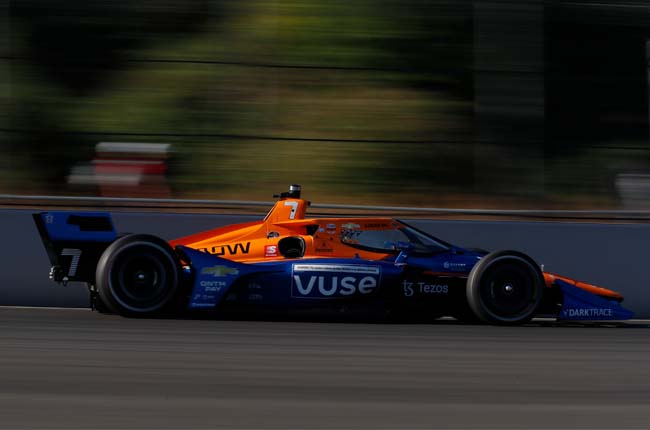 Arrow McLaren SP had a pretty good opening day to the Portland Grand Prix at Portland International Raceway on Saturday according to team president Taylor Kiel after Felix Rosenqvist set the fourth-fastest time in qualifying with a fastest time of 00:58.9505s and speaking following the action Kiel said:

“It was a pretty good day for Arrow McLaren SP. It’s one of the best combined qualifying efforts we have had as a team in a very long time. It was great to see Felix fighting in the Firestone Fast Six and ultimately qualifying in fourth, which is a great start for him, and Pato is not far off in seventh. Would we like to be starting further up? Yes, absolutely, but we can win from both of those positions. We had a good final practice, we know where our car lies, we know what changes we need to make overnight and we are looking forward to a good day tomorrow.”

Felix Rosenqvist in the No.7 Vuse Arrow McLaren SP Chevrolet ended the final practice session in 17th with a time of 01:00.5299s and speaking following the session he said:

“We had a pretty good day and ended up qualifying fourth. I think the car felt good all day. Every session it has been good enough for a top five, so that’s where you want to be. When you are in the Fast Six, you always want to go for the pole, so there are some mixed feelings there, but overall it’s good to have another solid qualifying. We can be up there and compete. It’s good for Pato too that we can be up front with him and help him compete for the championship. The final practice was solid for the team as well. It is always hard to judge the tire degradation and all that, but I think we are in a good spot.”

It was a disappointing qualifying for championship leader Pato O’Ward in the No.5 Arrow McLaren SP Chevrolet as he was bumped out the Firestone Fast Six by Rosenqvist and speaking following the track action, the Mexican commented saying:

“We didn’t have too bad of a day. We qualified seventh. Considering where we were on pace with reds, we extracted the most out of the car that we could. Felix did a great job to start fourth tomorrow. We are two rows behind, so I just think we need to get through Turn 1. Turn 1 here in Portland is usually pretty chaotic, so we just need to keep our nose clean in the beginning and try to run a smart race. From there we will see where we can pick up some spots.”