A Solid Race For Arrow McLaren SP In Portland 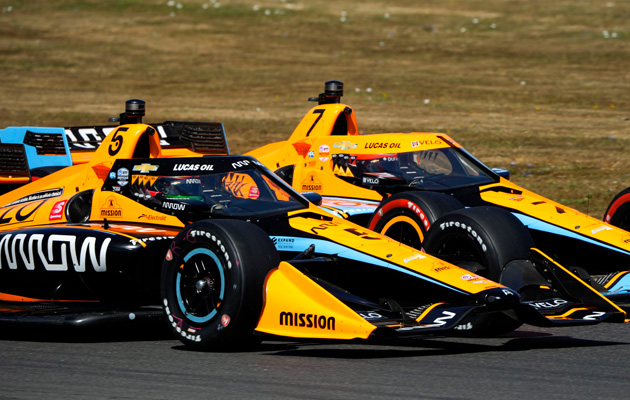 Arrow McLaren SP’s Pato O’Ward in the No.5 Arrow McLaren SP Chevrolet ended the Portland Grand Prix at Portland International Raceway in fourth place having started the race from fifth place. The Mexican suffered contact a little bit of damage to his car.

Sadly, for O’Ward he was is now mathematically out of the championship fight going into next weekend’s season-ending Firestone Grand Prix of Monterey at WeatherTech Raceway Laguna Seca in California.

O’Ward is now in seventh place in the championship and speaking following the action he said:

We had to come out of the race with a win today to truly have a decent shot at the championship at Laguna Seca. But, I didn’t have enough for the Team Penske drivers. All weekend, they dominated everybody. I tried to make the pass around Will (Power) and we had damage on the left side for the rest of the race, so I had to nurse it from there.
“Graham (Rahal) was coming behind us really quick, and I had to let Scott (Dixon) by because apparently we blocked him. I expect INDYCAR to make the same call going forward.

Felix Rosenqvist in the No.7 Arrow McLaren SP Chevrolet started the race from P6 and came home in tenth place speaking following the race he commented saying:

We started the race really good but had a tough second stint on the primary black Firestones because we couldn’t get the tires to warm up and get going. Ultimately, we were probably on the worst strategy of the race. I think one driver did better on that strategy than us, but everyone just ate us up, track position-wise, on that second stint.
“We came back and finished P10 – which was decent – but a bit disappointed in that result.

“We came in here looking for a race win, and the way things played out, we didn’t really get an opportunity to go off-strategy at any one point, and we were just a tick off the Penskes all day. I thought we had a really good race pace for most of the stint, certainly for the No. 5 Arrow McLaren SP Chevrolet. Starting on Firestone blacks was a huge advantage it turns out. The primary tire didn’t respond so well in the middle to the end of the race. Felix was a victim of that. He struggled quite a bit on his primary tire stint but nonetheless battled back, both cars in the top ten. Pato with a P4, not what we wanted but still a great result, a great team day. Everybody did a great job in pit lane, on the timing stands, and our drivers did what they had to do – a lot to be proud of.”