A Solid Top Ten Finish For VeeKay In Texas 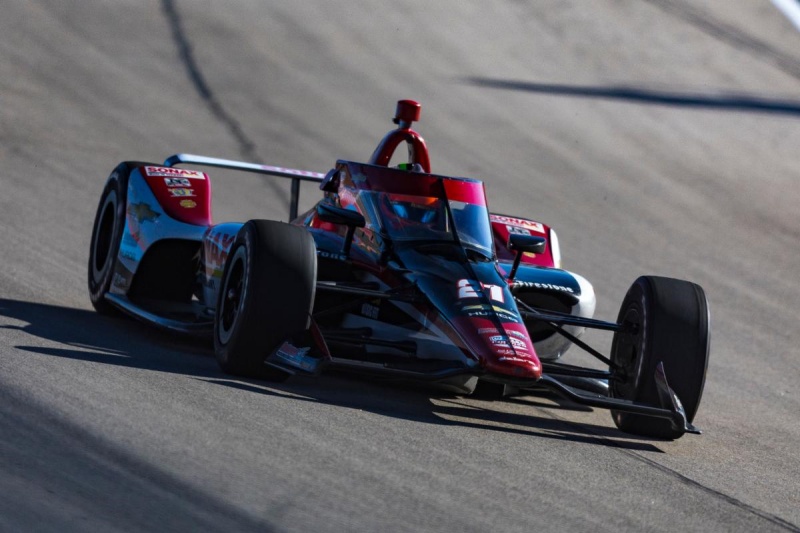 That was a hectic race! I actually wasn’t too happy with the car when I started the race. I had a lot of understeer which had me pit a little bit early. After that front wing adjustment and new tires, I felt awesome. We were very fast. I could race at the front and had an awesome restart. We may have stopped a lap or two too early on the last stop. We were definitely hoping for a yellow to come and we would have been golden, but that didn’t happen. P10 it is! Pretty happy we made it over the line with a running engine, we were really tight on fuel. If we can call this a race not going our way, it’s pretty good!”

Ed Carpenter who was working with Charlie Kimball as his engineer this weekend started the race from 21st place in the No.33 Alzamend Chevrolet and came through the field to finish the race in 13th place and speaking following the race he said:

It wasn’t a day I am super happy about, but it’s also not a day I am super upset about. We started pretty far back, so it was a good to move forward. There were a couple of things I could have done a little better for sure, but it was a decent showing. It’s good to get one under our belt as a group with the 33 crew. Looking ahead to Indy, we’ll have a lot more time there to get ready to go. It was an acceptable start, we definitely wanted more but it could have been worse!

Conor Daly in the No.20 BitNile Chevrolet started the race from 16th place and came home in 18th place and speaking following the race he commented saying:

This is not how we wanted our day to play out. I am still not sure what was going on in regards to our two drive-through penalties, it didn’t seem like the pit speed limiter was agreeing with my right foot. We need to get deep into the data, I’ve never had a pit speeding penalty my entire career. It’s not something I am used to! The BitNile Chevy was really fast today. We had a great, great racecar. We were working through the field, on the right strategy, but when you have two drive-throughs in ruins your race. It’s a shame to have that happen to us as I thought we could have been very competitive. It is what it is and we’ll move on to the next one!