The Arrow McLaren SP NTT IndyCar Series team announced this week ahead of the 106th running of the Indianapolis 500 presented by Gainbridge that they have commissioned the construction of a new 97,000 sq ft race shop in Whitestown IN.

The new facility will combine modern office space with technical areas, workshop space, logistics and transport areas, and even a dedicated space for the team to practice pit stops. The building will also feature a gym with an emphasis on sports science, allowing all employees to focus on their physical and mental wellbeing on and off the track.

“I am delighted to be able to confirm this news today. Part of our long-term strategy for Arrow McLaren SP is to relocate the team to a new facility fit for the future. This is both a clear sign of our commitment to IndyCar and also to the community of Whitestown, the City of Indianapolis, and the state of Indiana, which has been the home of IndyCar since the sport began.”

“This new facility will be a cataylst for motorsport and business growth for McLaren Racing in North America. We are working hand-in-hand with Whitestown officials throughout the entire process, making sure we create an environment for hard work and excellence. We look forward to having a new, class-leading home for our team with access to the state-of-the-art resources they need to compete for wins and championships Investment like this just shows the excitement and growth around IndyCar locally and nationally.”

“Indiana’s reputation as a leader in motorsports continues to gain speed with companies like McLaren Racing choosing to invest in our state. When Sec. Chambers and I met with Zak Brown during our recent trip to Europe, we were overly impressed that sustainability and adaptability have been the keys to their success. This aligns perfectly with what we are building here in Indiana.”

“I’m proud to support McLaren Racing’s growth in Indiana as the company creates quality careers and adds to our state’s already vibrant motorsports industry – further solidifying Indiana’s position as the motorsports capital of the world. The company’s focus on sustainability is squarely in line with the IEDC’s 5E vision for the future.”

It has been a busy race week for Arrow McLaren SP as they announced on Carb Day here at the Indianapolis Motor Speedway that Pato O’Ward has signed a new multi-year contract extension with the team and speaking to Paddock Eye at that announcement both Zak Brown and Pato O’Ward said that the continuity is great for the team as they look to the future to win races, championships and the Indianapolis 500.

Taylor Kiel said that they want to lay the infrastructure of the team and Pato O’Ward is a big part of that. 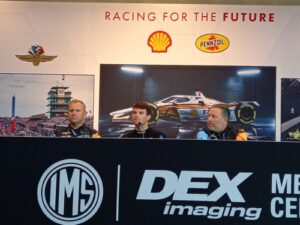