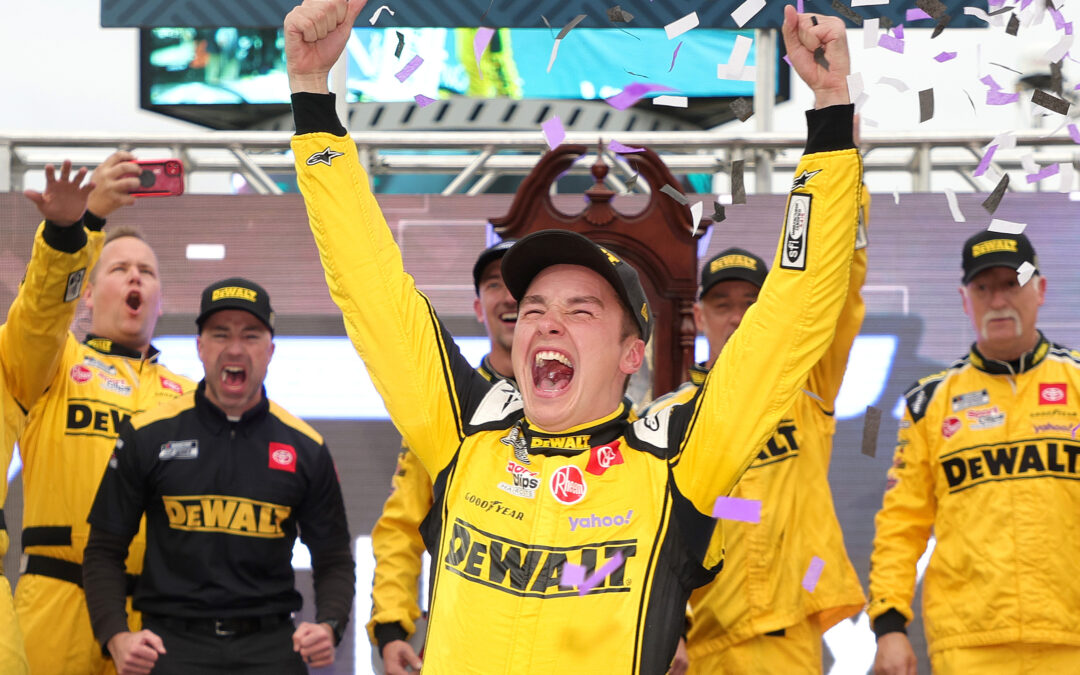 Joe Gibbs Racing’s Christopher Bell in the No.20 Delwalt Toyota Racing Development Camry claimed his spot in the NASCAR Cup Series Championship four shootout in Phoenix next weekend after claiming victory in the 74th Annual Xfinity 500 at Martinsville Speedway on Sunday and doing so joins Ross Chastain, Joey Logano and Chase Elliott in the championship fight.

Speaking following the race, Bell who claimed his third win of the season, and came from 20th on the grid to take victory commented saying:

Mom and dad, we did it—wow. “I can’t believe it, man. To come here in Martinsville, this place has always been so tough on me. Just pre-race looking up, seeing all the fans, this place is packed… I don’t even know what to say.

“Man, I say it all the time, but the driver is just a small piece of the puzzle for these races. The reason why this car won today is because it was the best car on the race track. (Crew chief) Adam Stevens… this entire 20 group, they just never give up. When our back is against the wall, looks like it’s over, they show up and give me the fastest car out here.

Defending champion and pole-sitter, Kyle Larson in the No.5 Hendrick Motorsports Chevrolet Camaro ZL1 finished the race in second place just ahead of Ryan Blaney and Brad Keselowski. Trackhouse Racing’s Ross Chastain made it into Championship 4 following a superb overtake through turns 3 and 4 on series veteran Denny Hamlin in the No.11 FedEx Joe Gibbs Racing Toyota Camry.

I made the choice, grabbed fifth gear down the back. “Fully committed. Basically let go of the wheel, hoping I didn’t catch the Turn 4 access gate or something crazy. But I was willing to do it.

“I just cannot believe that we have a chance to go fight for a championship. All we ask for is a chance. We kept our world small this year so far. We’ll do the same thing going to Phoenix.

Chase Briscoe who finished the race in tenth place was knocked out of the NASCAR Cup Series Championship Play-Offs and speaking following the action he commented saying:

Yeah, we were obviously on a lot older tires there. “Thought there for a little bit I was going to be OK. I just fell off a cliff pretty hard. I should have used the wall. Pretty good deal to use there.”

Joe Gibbs Racing’s Denny Hamlin in the No.11 FedEx Toyota Camry finished the race in sixth place just ahead of Joey Logano and William Byron. In his first race back following his suspension, 23XI Racing’s Bubba Wallace finished the race in ninth place having come through the field from 24th place on the grid. Chase Briscoe rounded out the top ten.