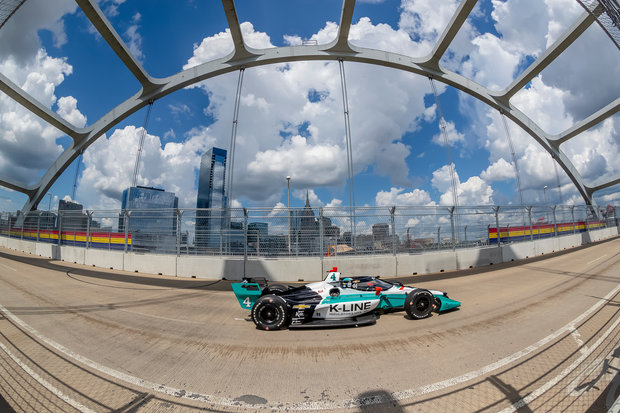 AJ Foyt Racing’s Dalton Kellett in the No.4 K Line Insulators Chevrolet scored his career-best qualifying result for today’s Big Machine Music City Grand Prix on the streets of Nashville. The Canadian drove a great lap to produce a time of 01:16.5600s good enough for P12 on the grid.

Kellett also has the likes of Simon Pagenaud and Scott Dixon behind him. Speaking following the action, Kellett said:

“We just posted our best qualifying of the 2022 season so far and it feels really great just to get that No. 4 K-Line Chevy into the Firestone Fast 12 on a great weekend here in Nashville. “Lots of interesting stuff going on, we had the Firestone guayule green alternate tires on which were coming up to temp really quick. It was kind of a parallel to the St. Pete qualifying where we did quite well. It seems like when we can get the tires to activate quickly and really just make it happen on that first lap, we seem to have an advantage there. We really press that advantage by just making sure we got ahead of the order of things as far as greens coming out to transfer so that’s something to look at. Very proud of this team overall for the result that we got here today.”

Kyle Kirkwood in the No.14 Sexton Properties Chevrolet had a great session too as he starts the race from P16 ahead of Alexander Rossi and Marcus Ericsson and speaking after setting a time of 01:15.4382s he commented saying:

“I have to say we don’t really have the pace that everyone else gets out of their cars on the green tires for whatever reason. “Fortunately, we assume it’s going to be a primary race tomorrow with the primary black tires, which we’ve been very quick on. Very quick on them in practice one, and we’re super quick on them practice two. We’ve got the car in a good place. So tomorrow if it’s black race, a primary race and everything stays dry, we’re going to be quick.”

Really so happy for Dalton and the 4 team. It was great to see that K-Line Chevy advance to the top 12 in qualifying. So really hoping we have a great day tomorrow. The 14 car is starting 16th, not where we want to start, but the car has been good all weekend. Hopefully we’ll have two good finishes and get out of Nashville with some good points