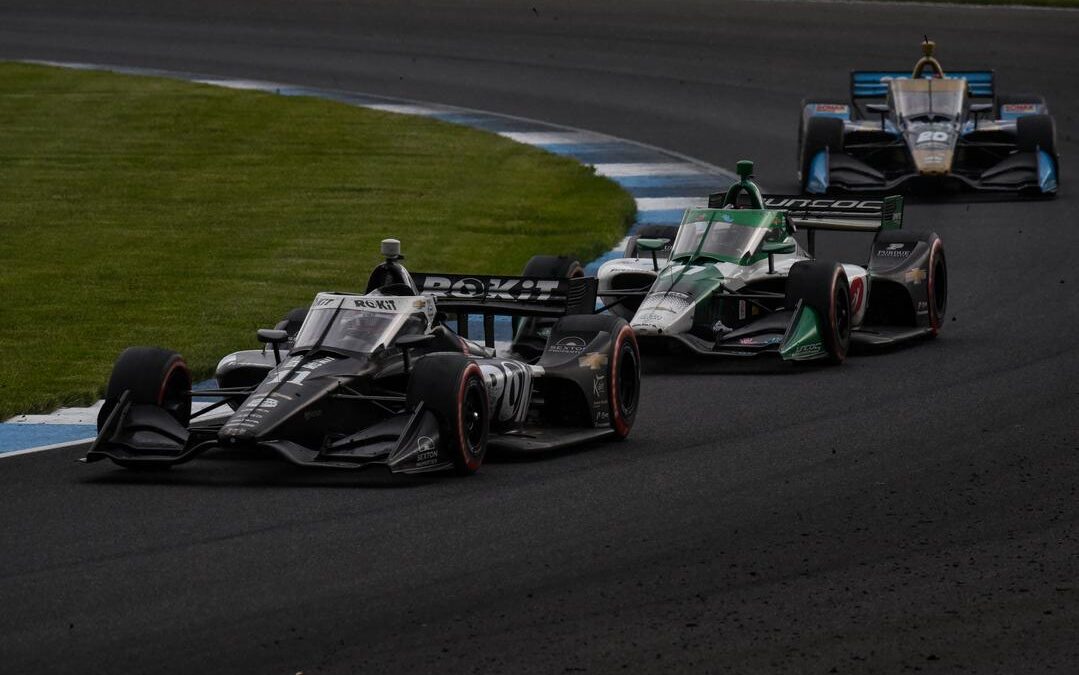 AJ Foyt Racing’s Tatiana Calderon in the No.11 ROKiT Chevrolet had her best NTT IndyCar Series race finish to date at the GMR Grand Prix of Indianapolis on the IMS road course on Saturday. The Colombian, who had never driven the IMS road course before Friday started the race from 25th place and came through the field following extremely tricky conditions at the Speedway to finish the race in 15th place.

Calderon also led her first laps as an NTT IndyCar Series driver and speaking following the action she said:

Larry [Foyt] told me over the radio, ‘You are the leader!’ And then he said, ‘Box, box.’ And I had to pit,” I think it’s been the craziest race that I’ve been part of really. “To start the race with wet tires, then go to slicks, it was raining but we weren’t sure what to do in terms of to stay on dries or go to wets. I think we did the right call by staying on dries as much as we could because I was just struggling quite a lot on the wet tires at the beginning of the race. I think that the team did a really good call on strategy and their reading of the conditions was really good today. The car felt really good in both semi-wet conditions and dry on the reds, so I had a really good feeling there.

The Colombian went on to say:

“I had a good fight with Montoya, with Ericsson, with a few of the top guys which is nice to see where you are in terms of pace, so I really enjoyed that. Unfortunately, in the last couple of restarts I got hit from behind, got in the gravel and we lost a lot of positions [seven] because I think we deserved to be a little bit higher up, but that’s racing. The last time the visibility was so poor so I’m happy we just finished and we brought the car home in one piece because it was really tough just to do that. A good progression since Barber in terms of the car and myself so I hope we can keep going in this direction. I just wish the team the best of luck for the Indy 500. I will be watching with great interest.”

Dalton Kellett in the No.4 K Line Insulators Chevrolet started the race from 27th and made his way up to P17 but was left disappointed as he was forced to retire from the race following contact and speaking following the action he said:

Coming out of Turn 4 into the kink in (turns) 5 / 6, I was setting up Malukas who was on cold tires, trying to get a run on him. Got a good run out of 4, got on push-to-pass and when I transitioned from turning right out of 4 to making the left into 5, the rear kind of let go and it just kind of tank slapped and I lost it basically. It went pretty suddenly so it was a bit of a surprise. It was too bad because we were definitely having a good race going up until that point. That’s not how we wanted to end it. There’s still a good amount of positives that we can take from that. Really walking away with my head held high than being dejected and kind of mad about it because we haven’t really been where we wanted to all weekend and I think we were able to at least race well up until that point.

Kyle Kirkwood started the race from 22nd place and came home in 26th after being forced to retire from the event following contact. Speaking following the action he commented saying:

Starting off, we actually had quite a good car I think both in wet conditions and in dry conditions. “I made a couple mistakes that didn’t ruin our race but it set us back a couple places. Fortunately, the way strategy worked out, we cycled up forward but I guess we were maybe a little too smart for the weather because we were planning on rain coming down quite a lot so we went to rain tires and so did many other people, but it went dry immediately afterwards. We ended up cycling pretty far back and after that we were one of the last ones to get back on to dry tires hoping that it was still going to rain. Somehow the rain just dissipated right as it got to us and when I came back out on track on the out lap, I got hit from behind by another competitor and that was the end of our race right there.

Kirkwood went on to say:

“I wish we would have been able to finish the race in those wet conditions. “I like running in the wet but it really wasn’t wet for any of the time that I was out there. In the beginning it was not wet enough really to run wet tires. It was sunny, drying. That’s why you saw everyone come in and put dry tires on really quickly, but it was just a mixed condition the entire race so unfortunately, we were just on the wrong end of it, it seemed like every time.”

Next up for AJ Foyt Racing is practice for the 106th running of the Indianapolis 500 which gets underway on Tuesday at the Indianapolis Motor Speedway where J.R Hildebrand will take over the No.11 ROKiT Chevrolet alongside Dalton Kellett and Kyle Kirkwood.