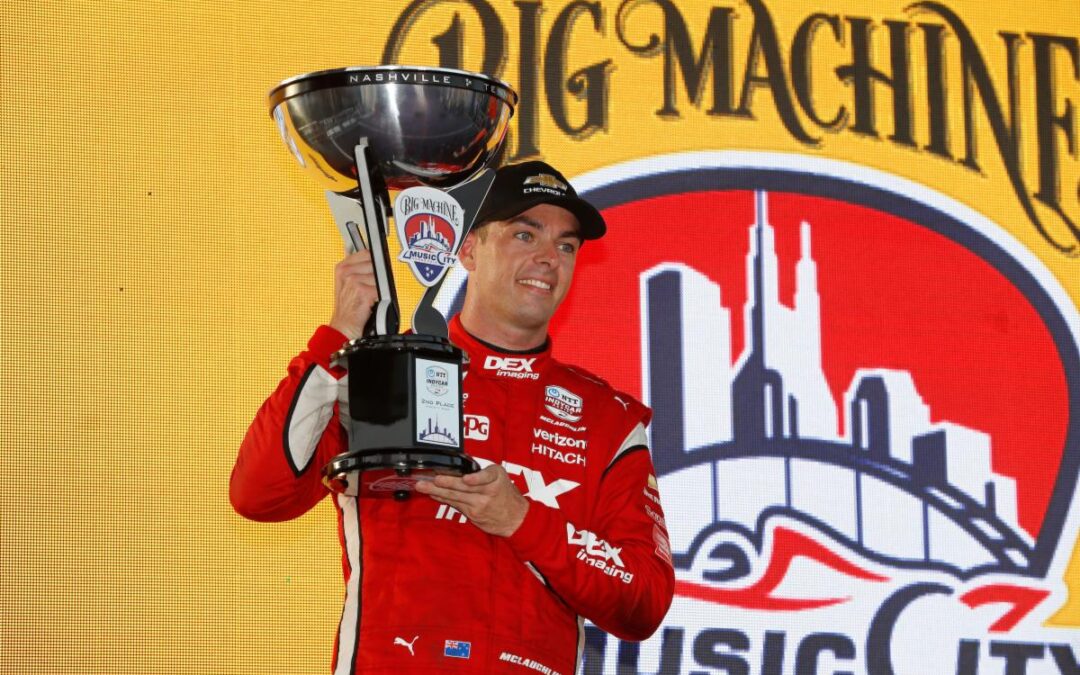 Team Penske’s Scott McLaughlin in the No.3 DEX Imaging Chevrolet was the stand-out Chevrolet driver in Sunday’s Big Machine Music City Grand Prix on the streets of Nashville as the New Zealander who started the race from pole position came home in second place behind race winner Scott Dixon.

LET’S START WITH THE CONTACT WITH (ROMAIN) GROSJEAN. “I was alongside of him fully if not a little bit ahead. (Watches the replay). “Yeah, I’m already ahead of him at that point. Welcome to INDYCAR. It gets tight. It’s a good thing I was ahead. That’s the biggest thing, you’re going to want to be ahead of this guy in this type of moment.

“It’s tight street course racing. I about got taken out six times myself. We probably need to have some discussion with the younger guys. They’re very aggressive and if you’re not aggressive back, then you get run over. That’s INDYCAR racing. You have learn it pretty quick. I don’t like it but that’s the game we’re in. Ultimately we had a big fight back with the PPG car and Team Chevy. That’s all I can say. This has been a really frustrating year in a lot of ways and the way it’s built. We’ve won a lot of races and had a ton of good luck, all thanks to the team and the effort they put in. But more often than not, we’re either winning the race or things are completely going against us one way or the other. It’s built frustration for me because it’s hard to see that happen for this crew when they work so hard. I hate it, too. I’m very competitive. It happens a couple of times a year where things don’t go your way, it’s part of the luck. It’s just happened one too many times, and today was another unlucky day with the way the whole thing played out. You can’t predict these races. It’s part of the game, but it can be frustrating at times.”

HOW MUCH MORE TIME DID YOU NEED? “One lap! We were alongside there across the finish line. We were 16th after that last pit exchange. I had an awesome restart and man the car was fast. The Dex Imaging Chevy was unreal – good on its fuel and good power. We just fell short at the end. Congratulations to Scotty (Dixon). I always dreamed about racing him to the finish. We kind of had that last year at Texas but this was a proper duel. I had a lot of fun. That’s why I come IndyCar racing. This is the best racing in the world.”

WHAT CAN YOU TAKE FROM TODAY? “I hate coming in second! It is what it is, but I learned a lot today. We’ll focus and get better. I’m really proud of everyone. I’m proud of myself, proud of my team and proud of everyone and how we rebounded. We came in with a car that was fast enough to challenge for a race win and got a pole. So it was a great weekend and a great points weekend. We’ll keep pushing the last three races of the year.”

WILL POWER, NO. 12 VERIZON 5G CHEVROLET, FINISHED 11TH: “We had the gear thing pretty early. Probably not even 30 laps in we got hit from behind. Whatever they have on the gearbox… I’ve it a couple of times and multiple people have so maybe they should change it. If you get hit from behind, it knocks out your shifting so you have to manually shift. You have to lift and you have to blip the throttle. That makes it an interesting day. I sat back and watched so much mayhem!”

AT POINT YOU WERE SITTING BEHIND SCOTT DIXON, WHO WON THE RACE. WITH THAT SAID, YOU’RE STILL LEADING THE CHAMPIONSHIP: “We thought this would be a bit of a wildcard race, like there was going to be a lot of mayhem so you just needed to survive it somewhat, which we did. We’re still in a great place and still digging deep. We’ll see what we can do in the last three races.”

“We were taking advantage of everything that we needed to. We had a good start, got a couple of spots, cycled forward, avoided accidents. But we just got hit really, really hard in the rear region of the car and broke the gearbox. Jack Harvey hit me, but he didn’t have anywhere to go either. It’s hard, if I go any deeper into that corner, I hit the two guys in front of me. We were just an innocent victim. The BitNile guys did an incredible job getting us back out there. We picked up a lot of positions as the race when on, due to even more chaos. Again, not where we wanted to be but we salvaged what we could.”

Well, well, well. Things that do not go together: oil and water and Rinus VeeKay and luck! Really, to begin with, I had an amazing race. I was passing people and really enjoying driving out there. I was actually ahead of the whole podium. It was going pretty good until I severely locked my brakes in Turn 9 and lost a bit. Then in the pits, lost a few positions, no biggie. Got them back! Then Graham Rahal, who is many, many laps down, went to inspect the wall and I couldn’t avoid him. I lost a lap there and just had to hang back. But ended up P12, not bad. All things considered: drove like a champion…finished 12th.

PATO O’WARD, NO.5 ARROW MCLAREN SP CHEVROLET, FINISHED 24TH: “I don’t know who caused the check-up. I saw a car slowing down so I had to get on brakes. If not then what Graham did to me, I was going to do to Will. Sadly there’s only one way to look at it. It was a big enough hit to break probably a gear or something in the gearbox. When you hit the attenuator with a pretty solid hit, that’s usually what happens. I couldn’t get it into any gear. And yes… that’s our day.”

“It was a crazy race. I think last year was crazy, but this one was even crazier. I didn’t even know what was happening.

“I just tried to have good restarts – there was probably six or seven restarts in the race. It was weird because everyone went way too early and then everyone hit the brakes. It seemed like everyone was going wide into Turn 9 so there were times where you made a bunch of spots and times when you lost a bunch. Honestly, it was like a flip of a coin or roulette going into that one.

“The No. 7 Arrow McLaren SP Chevrolet was really quick. I think we had a quicker car than where we finished. These days, you’re happy to just finish, honestly. There’s so much going on and I think the car is banged up on all four corners. But, a good job to everyone on the No. 7 crew and we’ll keep pushing.”

DALTON KELLETT, NO. 4 K-LINE CHEVROLET, FINISHED 25TH: “Not the way we wanted the weekend to end here in Nashville after our best qualifying so far in the NTT INDYCAR SERIES. We’re definitely leaving and taking the positives away from this weekend that we can with a good qualifying performance. We made some good strategy calls there… it was a good confidence boost for the team and myself as well. I’m looking forward to taking that into the remaining road courses. Next up we have Gateway, and that was a good race for us last year. We have a test there next week and hopefully that goes well. As far as today’s went, we just got caught up… in a pile-up in that back part of the track. There was really nowhere to go. I got into the back of Dixon and then got hit from behind. There’s a sensor on the back of the gearbox, and if that gets broken off you can’t shift. That’s basically what happened to us.”

“I mean honestly a fantastic race overall up until the lap that it ended for us. Fantastic strategy by the team cycled us up into what I think was P4 for on strategy or p3 on strategy and it was really close to even being further up like that than that. So I mean, we cycled back a few spots after some other people got lucky on a caution but then boom right away, we’re back into a hunting for when seemed like a podium and looking at the end of the race there. We were right behind Scott McLaughlin and he was fighting for the for the win at the end of the race, and that’s where I felt like we should have been so I was pushing everything I had. David Malukas was probably about a second off the pace, and I went to pass him and I just don’t think he saw me going through the lunge on the inside of turn nine. I did the same move on Simon Pagenaud and he was aware of the situation, but I guess I’ve got to look into it more, but that was just unfortunate. We were pushing super hard to try and get a podium because that’s what I think this team deserves at the moment.”

“That was a disaster in one way, but we finished P15 in the end somehow,” said Ilott. “We had an incident early on in Turn-6, where they pilled up. I had the clutch in, but for some reason it stalled. It took a minute for them to restart me, which they did get me restarted, but it was a bit frustrating. Once we got going, I was in the middle of the pack, and I think I got a touch from Felix (Rosenqvist) which gave me a puncture into Turn-9 and then had another big whack and then I touched with (Alexander) Rossi. I couldn’t turn and I thought the car was down and brought it back in. At this point we were four laps down, but where able to get back on track. The pace was good, but what a weird race. I’m glad to get a little rest now because that was a long couple of weeks. Thank you to everyone who watched and thank you to Juncos Hollinger Racing for supporting me and getting me through this weekend and getting me to the end to get those points. We beat a lot of guys who I needed to get points on, so hopefully we can make a few more positions during the final races left in the championship.”

“It was bit of a difficult day. We struggled with pace in general and then had the accident. I was trying to be out of trouble and got sandwiched when the track was blocked in turn nine. It was definitely a matter of wrong place at the wrong time. Life goes on and sometimes street racing is like that. You can get mixed into something not great and other times you can get a bit lucky. Lots of things to think about when we race back on a street course. I’m excited to head to Laguna. I wish we walked out of here with a good result, but I’m really looking forward to Laguna and hoping to have a good ending to the season there.”