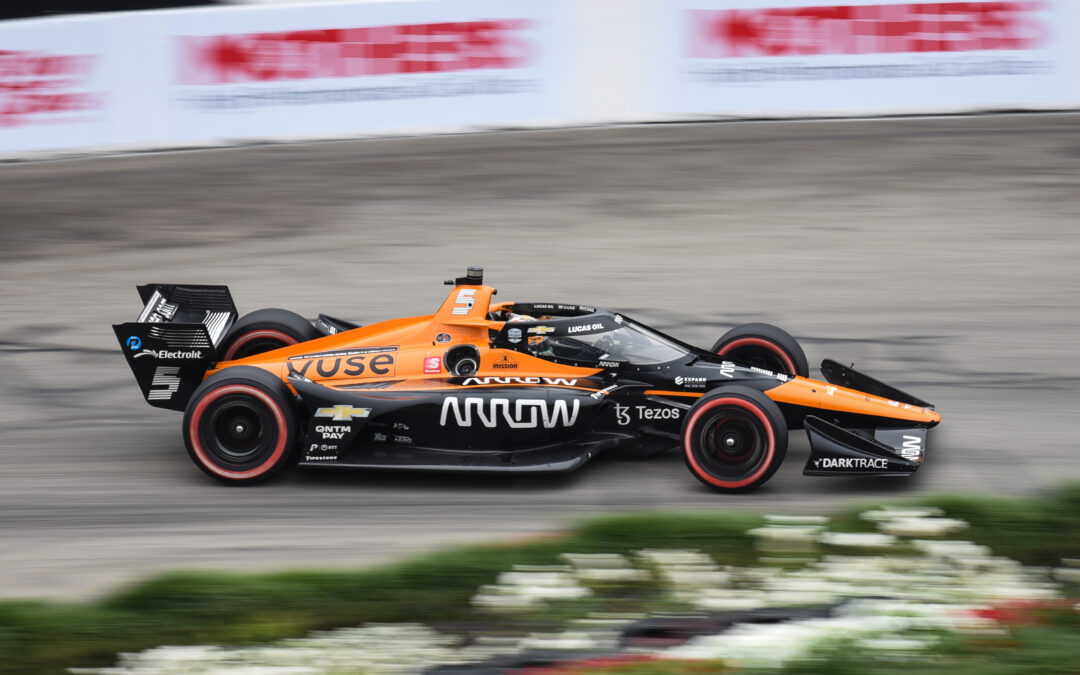 The team brought him down pit road and managed to get him back out on track however, despite their best efforts the team were forced to retire O’Ward from the race.

Obviously, that was not the result that we wanted here in Long Beach. We’ve had a great season: getting our first win, adding another win on top of that, and being on the pole multiple times. The entire Arrow McLaren SP team has a lot to be proud of. Next year, we have a great baseline to start from and we will be ready to fight for another title.

I just want to thank everyone for all the support this year. It’s great to see all the Pato fans at the track. Not just at Long Beach, but Arrow McLaren SP fans everywhere this season. I really feel the energy. It’s too bad that we didn’t get the result that we wanted but that’s racing.

Felix Rosenqvist in the No.7 Vuse Arrow McLaren SP Chevrolet started the race from 5th but was left disappointed as he came home in 13th place and speaking following the action he said:

That’s the final race of the year. It was a pretty good race up until a deciding point on strategy. We decided to stay out when it went yellow. In hindsight, it wasn’t the right call and we fell back after consistently running fifth. After everything was said and done, we were down in 16th. From there on, everyone was on the same strategy and it was a sprint race to the finish and the only option was to pass cars to go forward. I’m disappointed, I think we had a top-5 finish in the making, but it’s how the year has been. Looking forward to starting fresh next year with Arrow McLaren SP.”

That’s a wrap on the season. Certainly not the way we wanted to finish the race, with the No. 5 being hit from behind at the beginning of the race, followed by mechanical issue. We are not sure if it is from the contact but it was certainly a tough start and finish to the race for Pato.

All-in-all, what a fantastic season. We broke through with a victory and then captured another one. We hung in the fight all year long and came to the final race with a shot for the championship. That’s what we’ve been working on this year. To have consistent finishes and run with the top teams in the paddock. That’s our goal and I can say we achieved that this year. Our ultimate goal is to win the championship so we aren’t quite there yet. We have a long way to go, which is exciting to me. The ceiling is high and future is bright for this group. We will take a little bit of a break here and our quest for the 2022 championship starts a week from now. A lot to look forward to.

It took us a while to find our stride with Felix this season and find what he wanted from the car and the team. In the second half of the season, he found some pace and had the ability to run up front. That is good to see. Early in the season, we left some good results on the table that could have turned his championship around. Once we are able to take a step back, we will start to see the positives of the season for him and build on those for next year. The sky is the limit. Felix is a great driver, we have a good team around him, and we’ve proven we can run up front. Now we just need to do it with both cars.”