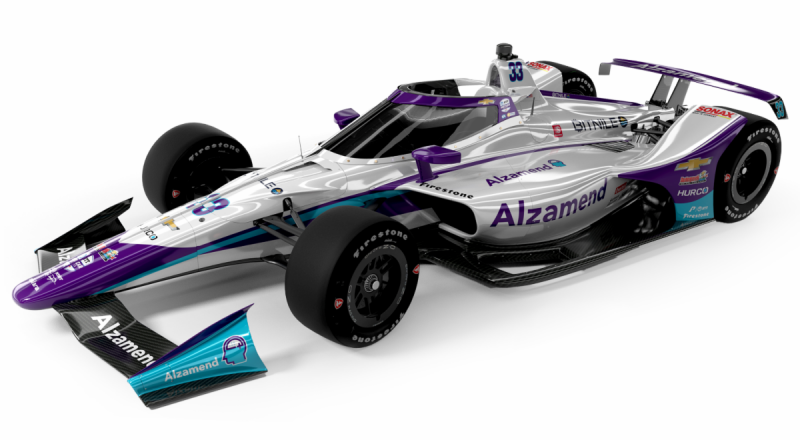 Ed Carpenter Racing announced on Friday morning ahead of this weekend’s XPEL375 at Texas Motor Speedway that team owner Ed Carpenter has teamed up with Alzamend Neuro Inc and will drive the No.33 Alzamend Chevrolet starting this weekend.

Ed Carpenter Racing (“ECR”) announced today that the team is joining the fight to “Making Alzheimer’s Just a Memory,” with ECR owner and oval driver Ed Carpenter showcasing Alzamend Neuro, Inc. (“Alzamend”) on his No. 33 car in this weekend’s XPEL 375 at Texas Motor Speedway.  ECR received a commitment from Milton “Todd” Ault, III, founder and Chairman Emeritus of Alzamend, a company focused on developing novel products for the treatment of neurodegenerative diseases and psychiatric disorder with a primary target of Alzheimer’s disease (“Alzheimer’s”), in order to sponsor the No. 33 Alzamend Neuro Chevrolet at this race. Mr. Ault is all too familiar with Alzheimer’s and the disastrous toll it takes on patients and caregivers. Mr. Ault’s grandparents passed away from Alzheimer’s and his father is currently suffering from this deadly disease. To honor all of those who are committed to “Making Alzheimer’s Just a Memory,” Mr. Ault has generously donated 1,000 tickets for Sunday’s race to any Alzheimer’s caregiver who submits a request at https://v-forward.com/caregivers/.

Team owner and driver of the No.33 Alzamend Chevrolet Ed Carpenter said:

“We are very proud to support Alzamend and raise awareness to their efforts to fight Alzheimer’s. This relationship is especially important to myself and my family as we have personal experience with Alzheimer’s and know how it affects the whole family. “We’ve been talking to Todd Ault and his team about how we can support Alzamend and it’s exciting to see this come together. Mr. Ault and his group have been fantastic since they joined us and their excitement for our sport and race team is so encouraging. I can’t wait to get out there and do a good job for Alzamend.”

“I was impressed by the camaraderie, diversity, and hospitality of ECR racing team and the Indy Car community.” He continued, “We identified with the team aspect of the sport, watching a diverse group of people work together to solve problems and win. Alzamend is doing the same with our commitment to the prevention, treatment and cure of Alzheimer’s.”