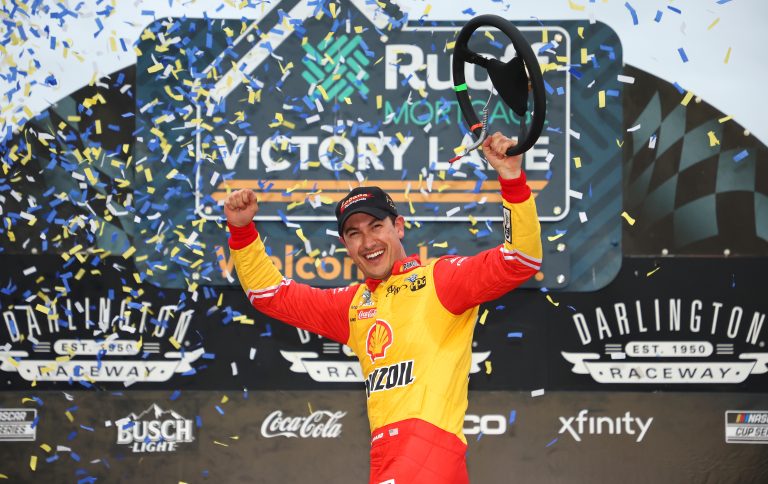 Team Penske’s Joey Logano scored his first career Monster Energy NASCAR Cup Series at Darlington Raceway in the Goodyear 400 on Sunday. It was Logano’s first victory in 40 races, dating back to March 2021 at the Bristol Dirt track.

Logano took victory after what was described as a bash and run on William Byron on the second to last lap and speaking following the victory he said:

Yeah, you’re not going to put me in the wall and not get anything back. “That’s how that works. Man, super proud of the Shell-Pennzoil team, getting a victory here in Darlington. You know what it’s like—I’ve never won here in a Cup race before.

“So proud of this race team. Great execution all day long. I’ll tell you what, the coolest thing is getting this car into Victory Lane. This is the car where it all started for me back in ’95 in a quarter midget. Really, honestly, all the young kids racing out there right now—this could be you.”

Hendrick Motorsports William Byron was enraged with what happened and came home in P13 speaking following the action, the driver of the No.24 Chevrolet Camaro ZL1 commented saying:

We were really close off of (Turn) 2, and I think it spooked him and got him tight, and he was right against the wall, and I got the lead. “He’s just an idiot. He does this stuff all the time. I’ve seen it with other guys.

“He drove in there 10 miles an hour too fast, and with these Next-Gen cars, he slammed me so hard it knocked the whole right side off the car, and no way to make the corner.

“Yeah, he’s just a moron. He can’t win a race, so he does it that way. I don’t know, we’ll… yeah, it was close racing on the restart. We were faster than him. Obviously, at the end the right rear (of Byron’s car) started to go away, and, yeah, he didn’t even make it a contest.

Track House Racing Ross Chastain in the No.1 Chevrolet Camaro ZL1 took his first career stage victory and speaking after being forced to retire from the race he said:

“We were fighting the balance all day. “We were racing with those guys for the lead. I just thought I could run the bottom there off of Turn 2 at the exit of the patch (of new asphalt). I just got loose on the transition and spun out.”

Joey Logano in the No.22 Pennzoil Ford Mustang spoke about the last few laps of the race saying:

Just an incredible race there at the end with William. I don’t know if he meant to get into me and fence me, but he did and at that point I felt like it was game on and was able to get back to him there the last few laps, pushing really hard, and just knew that was my shot to win the thing and I had to take it. Man, I’m so proud of this team. It’s so cool to win in this car. This is my first quarter midget. This is the beginning and to see it in Victory Lane, I’m just so proud. My family is here. My mom, my dad. Happy Mother’s Day. My sister is here. Everybody is here. My wife is not here, unfortunately, and my kids, but this is a very special day to be able to get this one in Victory Lane and celebrate with a few of us here.”

HOW IMPORTANT WAS IT TO BOUNCE BACK AFTER A SUB PAR WEEK? “

Such a huge recovery. Last week was the lowest of lows and the week before that we wrecked at Talladega, so to come out of here and get the pole, get a stage win and then ultimately win the race at the end, I couldn’t be more excited about what we just did. The guys did an amazing job back here. The pit crew was great. The pit stall helped a lot. I tell you, winning at Darlington means so much. This is one that’s come very close to me a few times and have never been able to get it done, so proud to get it.”

THIS IS A TRACK EVERY DRIVER WANTS TO WIN AT. WHAT DOES IT MEAN TO YOU?

Oh, man. You kind can kind of look at it as Throwback Weekend and there’s so much footage that everybody plays throughout the weekend of all the old races, all the legends that have raced here and say they’ve won here. It’s nice to put your name on that list. This is where a lot of it started for NASCAR, so to get one here and, like I said, this quarter midget. I said it on the frontstretch, but it just goes to show all the young kids racing, whether its quarter midgets, Bandeleros, Legends cars, Outlaw cars, whatever it may be, stick to your dreams. That was the advice that Mario Andretti gave me when I was a kid. He gave me a signed poster and it said Never Stop Chasing Your Dreams, and this is what can happen, so pretty cool.”

“I felt like we finished probably better than we should have, but I think the guys did a good job on pit road with our Rheem Ford Mustang and just kind of one side or the other.  The last run was probably the best that we were, just being able to hold on.  We just couldn’t hold on once it started getting cooler, but we wound up with a good call there and got the caution and wound up in the right spot and then were able to capitalize on it.”

“We had an up and down day and kind of felt like it was a missed opportunity for our Menards/Libman Ford Mustang.  We got way too loose in the middle of the race.  We got the car driving really well and then about halfway we started having some engine problems and were really down on power that really prevented us from moving our way back forward through the field once we got back on the lead lap.  It definitely was not meant to be.  Every single caution that would have hurt our strategy came out exactly when it didn’t need to so just not ideal, but we certainly learned a lot as a team today and got our car driving well again in stage three, which I think there’s a lot to learn from that.”

“I just blew a tire.  I’m pretty sure I ran over debris off of two.  There had been debris there for about 25 laps and I think I finally got it.  I just blew a tire and went straight.  That’s part of it.”

DO YOU FEEL ANY WORSE FOR WEAR AFTER THAT?

“I mean, it doesn’t feel good, but it could be a lot worse.”