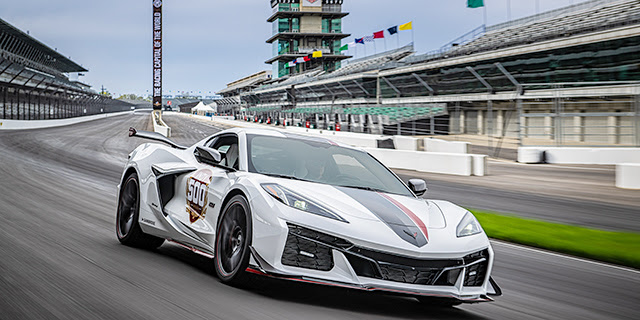 The Indianapolis Motor Speedway and Chevrolet announced on Tuesday that former NTT IndyCar Series driver and team owner Sarah Fisher will drive the 2023 Corvette Z06 70th anniversary edition Pace Car for the 106th running of the Indianapolis 500 presented by Gainbridge on Sunday, May 29.

Fisher, a native of Ohio, holds the record for the most number of Indianapolis 500 starts with nine between 2000 and 2010.

Fisher also holds the four-lap average qualifying speed record for a female driver at the Indianapolis Motor Speedway of 229.439MPH which she set in 2002, speaking about the news that she will drive the pace car, Fisher, who remains involved in IndyCar as the pace car driver throughout the regular season said:

“Every time I’ve had the opportunity to drive at Indianapolis Motor Speedway, it’s been special – from INDYCAR SERIES cars to two-seaters to vintage cars. “Driving the Pace Car is just as special of an honor. And to have served in that role for the NTT INDYCAR SERIES since Johnny Rutherford retired, I’ve had many great memories to add to my career. 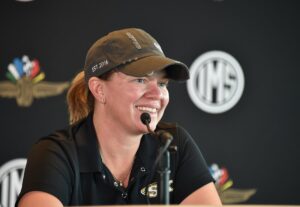 Fisher went on to say:

“I am humbled and proud to become the official Pace Car driver for the 106th Indianapolis 500 and to represent the hard work and development that Chevrolet puts into these fantastic pieces of automobile advancement and technology.”

The 2023 Corvette Z06 is powered by the all-new 5.5L LT6 which creates 670 horsepower, making it the highest-horsepower naturally aspirated V-8 ever to hit the market in any production car. The Indianapolis 500 Corvette Z06 Pace Car exudes confidence with a wide stance and exotic mid-engine proportions. This year’s Pace Car is equipped with the available Z07 Performance Package, featuring a carbon fiber rear wing, aerodynamic ground effects, carbon ceramic brakes and more, for maximum track capability.

An interesting fact about the 106th running of the Indianapolis 500 is that this year marks the 33rd time that a Chevrolet has led the field to the green flag since 1948.

Sarah Fisher is an Indianapolis 500 icon who always takes the time to appreciate her fans and represent the Indianapolis Motor Speedway and ‘The Greatest Spectacle in Racing’ with class and humility. “She is such a fitting person for this honor, and it will be such a thrill and privilege to see her lead the field of 33 cars to the green flag before a huge crowd at the track and a global television audience.

“I’m sure Sarah will enjoy driving the 2023 Corvette Z06 70th Anniversary Edition, which is an incredible car with the performance to match its great looks.”

The on-track action at the Indianapolis Motor Speedway for the month of May gets underway on Friday with qualifying for Saturday’s GMR Grand Prix of Indianapolis on the IMS road course, round five of the 2022 NTT IndyCar Series season.