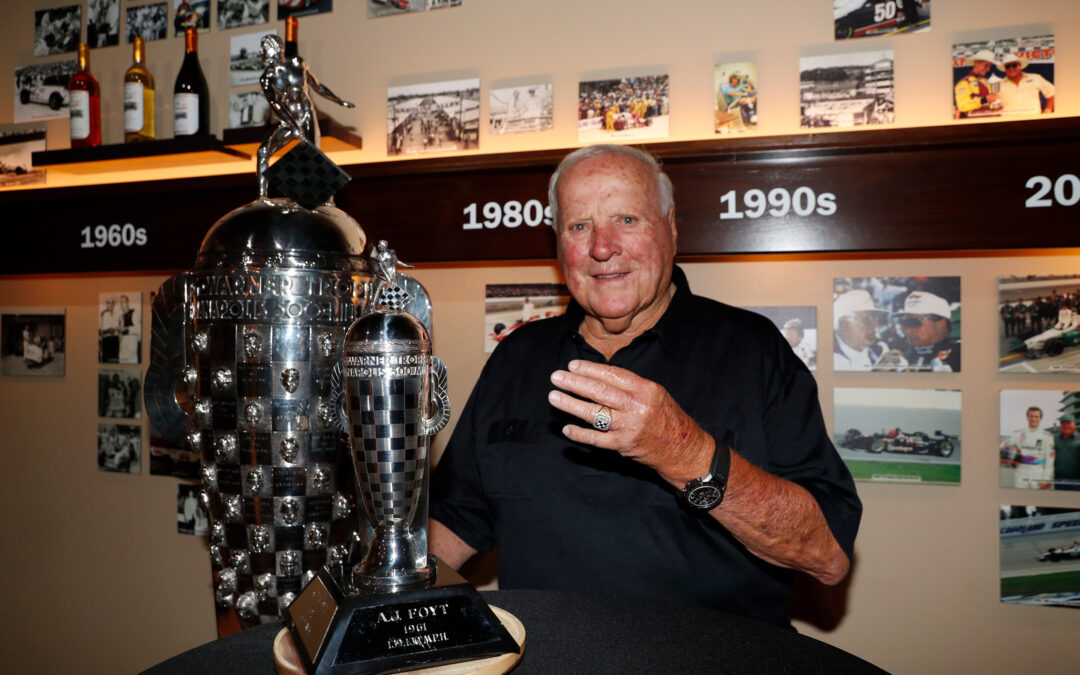 Four-time Indianapolis 500 winner and NTT IndyCar Series team owner AJ Foyt received a very special Baby Borg trophy from the BorgWarner Company on Wednesday. The 87-year old 4 time 500 winner and one-time winner as a team owner in 1999 was presented with the special trophy by Michelle Collins, Global Director of Marketing and Public Relations for BorgWarner who said:

“We are honored to share the night with A.J., and his friends and family to present him with his very own, one-of-a-kind, Baby Borg trophy. “As an Indianapolis 500 team owner A.J. was awarded an Owners Baby Borg for Kenny Brack’s 1999 victory and now we’d like to honor him in a special way for his four Indianapolis 500 wins on this his 64th anniversary at Indianapolis Motor Speedway. A.J. means so much to so many race fans around the world and especially here in Indianapolis. He is the founding member of the four-timers club and has his name in the record book for so many accomplishments at the Brickyard. It was a wonderful evening few will forget and all were very proud to be a part of – this one’s for you A.J.!”

Foyt’s unique Baby Borg features a trapezoidal marble base which on each side represents one of his four victories at the Brickyard featuring his name, the year of his win and the average speed. The sterling silver plates were hand engraved by Reid Smith who engraves the same information on the actual full-sized Borg-Warner Trophy.

“The other night meant an awful lot to me. “Getting that beautiful trophy which is the only one there is with my four victories on it makes it very special to me. It will go with my original trophies and I just really appreciate everyone who made it happen–especially Michelle [Collins] and [Steve] Shunck.

Parnelli Jones who won the Indianapolis 500 in 1963 spoke from his home in Rolling Hills, California commented saying:

“I wish I could have been in Indianapolis to be part of the event. “A.J. and I sure have shared some wonderful times together on and off the track at Indianapolis. I think back to racing the roadsters in the early 1960’s – those were special times and I’ll never forget them. Congratulations to A.J. – I’m glad he was honored in the presence of friends and family at the Foyt Wine Vault, it’s only fitting.” 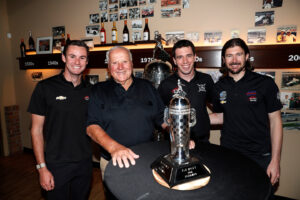 AJ Foyt was joined at the presentation by his Indy 500 drivers, Dalton Kellett, Kyle Kirkwood and JR Hildebrand