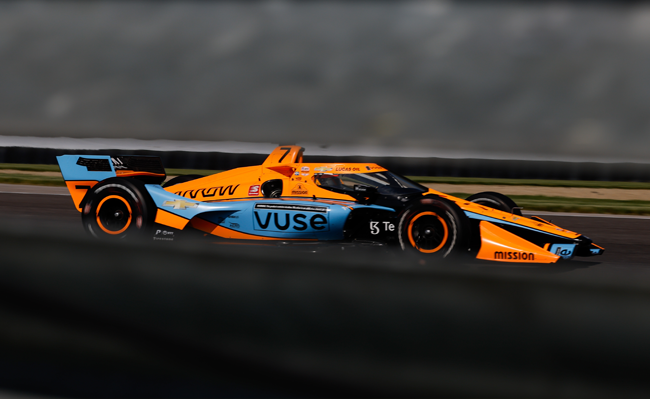 The Arrow McLaren SP Chevrolet team had an extremely strong run at the GMR Grand Prix of Indianapolis on the IMS road course on Saturday in incredibly challenging weather conditions at the Brickyard.

Pato O’Ward and Felix Rosenqvist started the race in fifth and sixth place respectively and made contact with each other but managed to recover in the race. For Pato O’Ward, he gambled by racing on Alternate tires when the weather was wet and it seemed to be working however, the rain became too intense and he was forced to pit under caution and came home in P19 and speaking following the race he said:

“Today was probably the craziest race I have raced in the NTT INDYCAR SERIES. I feel like the team deserved so much more today. I really, really do. Nobody was quicker than us with rain tires and we were really strong in the dry as well. We put ourselves in a position to challenge for the win after spinning but we made a gamble and didn’t make the right tire choice. Mother nature brought more rain and made it impossible to drive on slick tires. That’s how racing goes sometimes. It was a fun and entertaining race but the outcome was disappointing.”

Felix Rosenqvist in the No.7 Vuse Arrow McLaren SP Chevrolet started the race from sixth place and recovered from the early in the race to finish the race in sixth place and speaking following the action he said:

“That race had so many swings. We had a perfect race at the beginning. We went one lap longer than Herta and Pato, so we were in the best fuel and tire situation. Everything looked really good but then on the restart, there was contact in front of me and I couldn’t avoid it. Pato was able to keep going but I stalled. Then we were a lap behind but we were able to get that back. Finally, on the last stint, we nailed the tire choice and we went from 18th to 6th in the course of about ten laps. That was great. Overall, a solid day and great effort by everyone at Arrow McLaren SP.”

For Juan Pablo Montoya in the No.6 Lucas Oil Chevrolet he felt that the race went really well for him despite retired from the race however he completed most of the race and collected valuable information about the car and speaking following the action he said:

“Despite the result, it was a really good day for the No. 6 Arrow McLaren SP team. I told them we had a really good car and that I hadn’t used it well all weekend because I have just been behind the car. The extra laps during the race, I started to get more comfortable and started passing people. I was much more comfortable than last year. My engineers have done a really good job with the car. I’m really encouraged for the Indy 500. It’s a shame that at the end, I couldn’t really see anything. Overall, it was a good race and we should have had a good result.”

Today was frustrating. It was a tough race. There were a lot of decisions to be made throughout the race, with changing track conditions and choosing between the tires, so there was a lot of variables to balance. With Pato, we felt like red tires might be the tire to close the race out with when the rain stabilized but unfortunately we remained yellow for a long time and the track got saturated with water. The gamble didn’t pay off there.

“Felix had a great recovery, after contact in the middle of the race, to finish in sixth. That’s a great result for him. Juan was running inside the top ten and it just got away from him at the end in the wet conditions.

“It was one of those days where we felt like we had really strong cars and an opportunity to win, and we didn’t. We will go back to the drawing board, understand what went wrong, and we will learn. You either win here, or you learn. Now it’s time to focus on preparation for the Indianapolis 500.