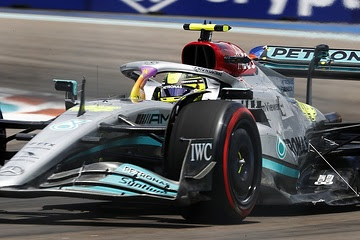 Mercedes AMG PETRONAS F1 Team’s Lewis Hamilton will start Sunday’s inaugural Miami Grand Prix from sixth place on the grid after setting a time of 01:29.625s and speaking following the action he said:

Today was a much, much better qualifying session than I’ve had the last three races so I am grateful for that – I’ll take it. We just keep on chipping away and keep working on it. So much amazing work has gone on in the background and everyone is working so hard. Unfortunately, I don’t think we are moving forwards at the rate that we would like to, the gap is similar to the beginning of the year. We have just got to keep our heads down, keep focused, keep working, keep tunnelling and eventually we’ll get there. It’s difficult to say how we’ll be on race pace, the car has generally not felt strong this weekend for me but today, once I was able to get the tyres into a better place, it was a little more promising.

George Russell starts the race from 12th place with a time of 01:30.173s and speaking following the action he said:

The car was bouncing a lot more today and I just couldn’t attack any of the corners as a result. It’s a shame because we showed good potential yesterday but it massively went away from us today. We thought we went pretty conservative with set-up in qualifying to avoid the porpoising we experienced in FP3 but it seemed just as bad. The bouncing was going through all the corners, particularly turns 4 and 5, and you just couldn’t attack into the braking zone. When you get the car in the window, it’s fast and yesterday we looked to be fighting for pole but today is our worst qualifying of the year so it’s difficult to make sense of.

Qualifying certainly wasn’t satisfying today, P6 and P12 isn’t where we should be and not where we thought we would be after a solid Friday yesterday. Although we are seeing glimpses of performance in some sessions, we are still not able to put it all together. We gained good reference points from Friday, we just need to continue to understand and develop but it’s clear that we have a painful trajectory to follow at the moment.

We’ve had a couple of tough sessions today given what seemed like legitimate cause for optimism yesterday. For some reason we’ve lacked rear grip all day and it’s made for a very unpredictable car for the drivers. We’d made some changes going into qualifying in an attempt to improve both balance and bouncing but it was still an issue and as soon as the rear started sliding, we’d experience overheating. We now need to make the most of our start positions of sixth and twelfth. We’ve got very little long-run data from yesterday due to the red flags but that’s the same for all teams. If it’s as hot as it was today, then degradation and overheating will be significant. That can create opportunities in the strategy but ultimately the big factors will be race pace and whether it’s possible to overtake.