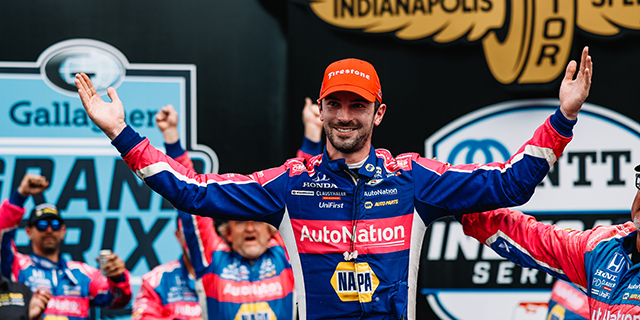 The Californian joined Andretti Autosport in 2016 and immediately showed great talent taking victory as a rookie in the 100th running of the Indianaplis 500.

Rossi has been with the team for seven seasons and Edwards hopes that the team can give him a great send off on Sunday.

Hard to believe it’s the last race of the season. Obviously, Colton has had great success at the last two races here and we’ll look to continue that. Our last race with Alex and a great opportunity to remember all the good times over the last seven years. He has been a great teammate and a good friend for many of us. We wish him well.

Rossi in the No.27 NAPA Auto Parts AutoNation Honda is looking forward to what is most likely set to be an emotional race for him.

Cannot believe we are here. Final race of the year and my final race with Andretti Autosport. It’s been an amazing journey and we will look to end it on the highest of notes as we get to my home track and a place that we have had a lot of speed at in the past. Really excited to get on track.”

Colton Herta in the No.26 Gainbridge Honda heads into the event this weekend as defending race winner and he will be hoping to end his season on a high night with a strong result to bring into the off season.

I’m really looking forward to getting back to Laguna. We have a strong history here to defend, but I don’t see any reason we can’t roll off the trucks strong and get right to work. We’ve shown good paces on road courses this year and I’m looking forward to ending the season strong.

Romain Grosjean in the No.28 DHL Honda says that WeatherTech Raceway Laguna Seca is one of his favourite circuits in the world.

Laguna Seca is one of my favorite circuits in the world. I had a really good time last year there and finished on the podium. I hope we can finish the season with a positive weekend.”

Devlin DeFrancesco in the No.29 Jones Soda Company Andretti Steinbrenner Autosport Honda is hoping to transfer into the Firestone Fast 12 this weekend and end hos rookie season on a high note.

Looking forward to Laguna; the last round of the season. Hoping to have another strong transfer into the top 12 in qualifying and a nice top-10 finish to end the season would be mega. Then we can go off into the offseason and really work hard and prepare for next year. I’m looking forward to year two with the team and to make a big step. But just trying to finish off the season strong with all the support I’ve had from everyone at Andretti Steinbrenner Autosport and sporting the Jones Soda livery.”