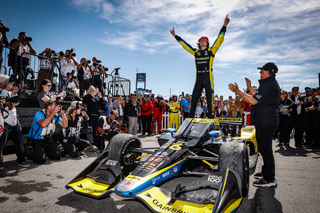 The Californian who took pole for the race led all but four of the 95 laps and speaking following the action he said:

The whole race Alex [Palou] was right there and then [Romain] Grosjean at the end was putting pressure on Alex, who was putting pressure on me. It was a very interesting race to see the cars struggling with tire degradation that we were much faster than, but once we got to them we were just kind of stuck behind them struggling to overtake them. It was a balance for most of the race attacking and trying to get past those guys we were stuck behind, but also defending from Alex. It was a very different race from the one we had in 2019 for sure. Both this one and the win in 2019 were refreshing and fun, but I was glad that it was over because there were some points that it was getting a little bit closer than I wanted it to be.”

Ryan Hunter-Reay in the No.28 DHL Honda said he drove his butt off coming from 19th on the grid to finish the race just outside the top ten in 11th place.

James Hinchcliffe had a really difficult day in the No.29 Genesys Honda starting the race in 11th and coming home in 20th thanks in part to a four stop strategy.

Speaking following the action the Mayor of HinchTown who goes into what could be his last ever IndyCar race in 20th in the championship said:

Obviously, a really difficult race for us. The car kind of inexplicably went way looser than we predicted based on warm-up and the whole weekend. We maxed out on the amount of front wing that we could take out trying to chase it. Credit to the guys in the pits. They did a good job and worked on the car throughout the race until we got it there, but by then the damage was done and unfortunately we were back down where we were. A tough break, but we will move on to Long Beach. We’ve always run well there and hopefully we can keep that going. Congrats to Colton [Herta] on the win.”

Alexander Rossi in the No.27 NAPA Auto Parts Honda who started the race on the front row was incredibly disappointed after colliding with his teammate Colton Herta and came home in 25th place.

“I had a good start. Colton [Herta] went off in front of me and I had a run on him. Everything was fine and then we kind of had some contact. When we did, it felt like it just ripped the wheel out of my hand. It was a weird scenario. He [Herta] didn’t do anything wrong. It was just one of those deals. I don’t think we could beat that outcome again if we tried it a hundred other times, so our day was over before it started. The NAPA AUTO PARTS car was good, considering we were trying to stretch the fuel. Ultimately, congratulations to Colton and the 26 guys.”