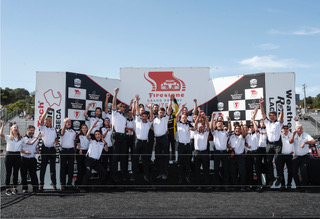 Herta dominated the race, leading the majority of the race and came home just ahead of Chip Ganassi Racing’s Alex Palou in the No.10 NTT DATA Honda and Romain Grosjean in the No.51 Nurtec ODT Honda for Dale Coyne Racing with Rick Ware Racing making it a HPD podium sweep.

HPD had seven cars in the top ten and have claimed nine wins this year including the 105th running of the Indianapolis 500 presented by Gainbridge with Meyer Shank Racing’s Helio Castroneves.

Speaking about the achievement, David Salters, President of HPD said:

This is a moment where I would like to thank all of the stupendous efforts of our team at HPD – who work really hard and are always trying to improve themselves – and days like this just validate their efforts. This is our fourth consecutive Manufacturers’ Championship, our 10th total it comes on the 25th anniversary, almost to the day, of our first IndyCar title. It just shows how serious Honda is in developing people and technology through motorsports. Massive thanks to Honda, massive thanks to our brilliant team, and our brilliant teams! And what a way to win in, we had another sweep this weekend thanks to Colton, Alex and Romain – superb efforts. Well done!”