I Am Probably The Happiest I’ve Been In F1 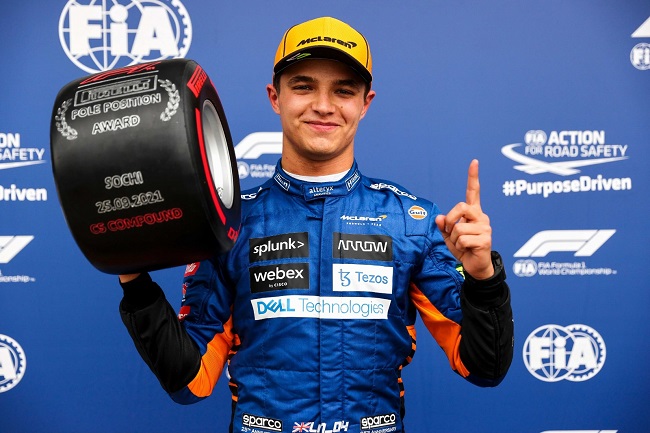 McLaren Racing F1 Team’s Lando Norris says he is probably the happiest he’s been in F1 after he secured his maiden F1 pole position on Saturday for Sunday’s Russian Grand Prix at the Sochi circuit. The Englishman set a fastest time of 01:41.993s and speaking following the action he said:

“Obviously I’m very happy – probably the happiest I’ve been in F1! My first pole position in Formula 1 and in some pretty tricky conditions. It was very tough out there, a lot of risks taken, a lot of times I thought I could’ve ended up in the wall – but it all paid-off and was worth it. Thanks to the whole team for giving me a great car today. It’s an amazing feeling to get pole and something I’ve always dreamed of since I was a kid. So now I can finally tick that off, and hopefully tomorrow we can just go for another strong result.”

Daniel Ricciardo was fifth with a time of 01:44.156s and speaking following the action he said:

“I’m glad we got to get the session done – who would’ve thought we’d finish on slicks when there was a chance of not even doing qualifying today! So, it was fun. It was actually really fun! We enjoyed it. Congrats to Lando on his first pole, and to the team – to keep the momentum of Monza is really cool. So, everyone is really upbeat. From a position point of view, I’m okay with fifth. I think it obviously puts us in good shape for tomorrow. Those conditions today were so hit and miss, you could gain or lose time so easily. There were certainly a few corners that bit me, but it’s all good. We learn from it. I’m pretty pleased. Congrats to the whole team – it was exciting, it was fun and now let’s keep the train going!”

“Lando’s first pole position, our first pole position since 2012 and Daniel qualifying P5 make this an excellent Saturday for our team. Congratulations to everybody at the track, back at the factory and our colleagues at Mercedes HPP, because that was an exceptionally challenging qualifying session, executed very well. All through the sessions, it was important to have the right tyres on the car, and the car in the right position on track. We judged that perfectly today and had two drivers who pulled it off when it mattered.

“We’re dedicating pole position to Mansour Ojjeh – today would have been his birthday – and looking forward to what should be another exciting Formula 1 race tomorrow. We have a competitive car and are in a great position to score good points.”