I Can’t Deny, Things Feel Ready Good On The 2 Car 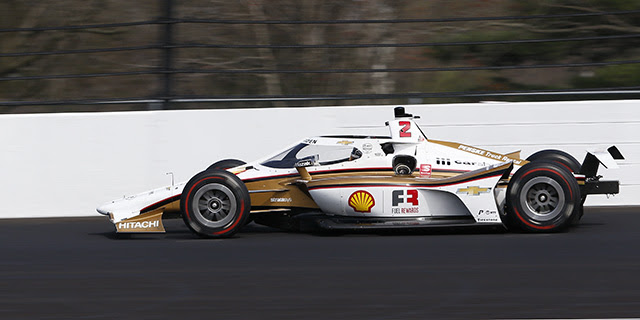 Two-time NTT IndyCar Series champion Josef Newgarden in the No.2 Shell Team Penske Chevrolet led the way on the second day of practice at the Indianapolis Motor Speedway on Thursday where he hit the 229MPH mark.

The championship leader feels really good with where the car is at and speaking following the action, the Tennessee-native said:

I can’t deny things feel really good on the 2 car. “They’re just progressing. It’s not like two steps forward, two steps back, or vice versa. I feel like it’s going forward every single time, and we’re just getting better.

Will Power in the No.12 Verizon 5G Team Penske Chevrolet who had a scary moment on Wednesday feels that the team won’t get a clear picture of where they are at until May 21, qualifying day when they will get to turn up the boost on the car.

We won’t know where we stand in the true place until the Saturday of qualifying (May 21) when everyone does their first run. “That’s when you’ll have a bit of an idea the sort of speed we might have.

“You need (extra boost for qualifying), with everyone going on single runs on exactly the same fuel load with no draft, all that. That’s the only way you’ll know.

Up next for the NTT INDYCAR SERIES is the fourth race of the season, the Honda Indy Grand Prix of Alabama presented by AmFirst on April 29-May 1 at Barber Motorsports Park in Birmingham, Alabama.

The 106th Indianapolis 500 presented by Gainbridge is scheduled for Sunday, May 29 at IMS.