I Drove It As Straight As I Could Team Penske’s Will Power in the No.12 Verizon 5G Chevrolet scored Chevrolet’s 100th NTT IndyCar Series win since 2012 and came from P16 to claim his first win of the season in Detroit on Sunday.

The Australian holds a three point lead in the championship over Marcus Ericsson heading to Road America this weekend.

I drove it as straight as I could,” Power said about his tire preservation strategy over the last 20 laps. “I never put any slip (angle) into it. I was just driving it really straight and really nice on the brakes and the throttle. I knew if I could keep a reasonable gap until the end, we’d be OK.”

Power went on to say:

Very enjoyable race because you had to chop through the field and fight hard. “It’s just redemption from last year. I was just waiting for something to happen those last 10 laps, but I just stayed laser focused.”

Obviously very satisfying. Redemption from last year. Yeah, the last stint, it was good because I had such a gap. On the out lap, it was really nice. You can do a bit of damage on the cold tires. I was really cognizant of not slipping the tire too much. Then just got in a rhythm and drove it really straight, really straight. Can be very quick that way. Just a certain way you can drive when tires are like that. The fact that the track had rubbered so much looked after them. They never, like, dropped and I was like, Oh, my God. I just looked after them in case there was a battle at the end. If I had to go hard at the end, I think I could have. Just a great day for Verizon and for Chevy. I cannot thank them enough. They work really hard. Certainly, improved over last year. Better drivability, better engine all around.

Yeah, really proud to get the hundredth win for them.”

Scott McLaughlin in the No.3 Gallagher Chevrolet started the race from tenth and finished P19 and speaking following the action he said:

Unfortunately, a tough day for us but at least one Team Penske car did win for Team Chevy in the final Chevrolet Detroit Grand Prix. That was the main goal for everyone. But yes, disappointing for us in the Gallagher Chevy. We were thereabouts all weekend and I just made one mistake that just absolutely destroyed us. I am really disappointed but the great thing about back-to-back weekends is that we have another go next week. We will reload and get going.”

Josef Newgarden in the No.2 Hitachi Chevrolet started the race from pole position and came home in fourth place.

It’s hard to not get annoyed. When we need a race to go all green, it doesn’t go all green. We needed that last year. We basically ran Power’s strategy last year, but that was not the race to do it. Today would have been the day, but we tried not to do it because of what happened last year. I don’t know what to tell you. We ran a good race, just strategy-wise it didn’t work out. On a day like today, the track had less grip in the beginning, so reds aren’t favored so early. You don’t want to run the risk of yellows because that is what happened to us last year. I don’t know. We ran a good race, it just wasn’t the race to run today. I don’t think you can blame anybody on that, it’s just typical INDYCAR and you just can’t predict these things. It is good to see Team Chevy get the win. I am happy for Team Penske and happy for Will (Power).” 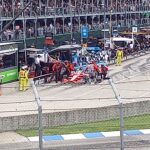 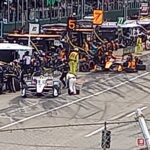 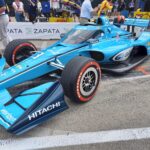 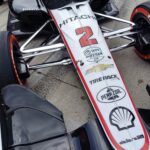 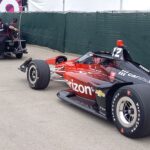 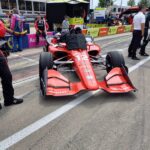