I Felt So Confident In The Car 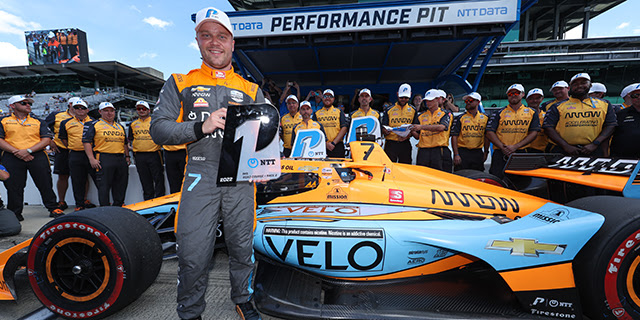 Arrow McLaren SP’s Felix Rosenqvist in the No.7 Arrow McLaren SP Chevrolet says that he felt calm in the car as he claimed his second NTT P1 Award of the season for tomorrow’s Gallagher Grand Prix of Indianapolis on the IMS road course.

I felt so calm in the car. “I think I knew when I did that lap that it was the one. Big, big thanks to the team. Really good car.”

Rosenqvist is joined on the front row by Andretti Autosport’s Alexander Rossi who commented following the action saying:

“That’s a huge effort from Felix. “Good job for him. This is by far the best result we’ve had here as a team. We had a good test here last month and very relieved it translated.”

Rosenqvist went on to say:

I appreciate everyone reaching out. “It means a lot, and I think it helps to have these kinds of performances.”

“Everything has worked out perfectly. “I’m super stoked, man.”