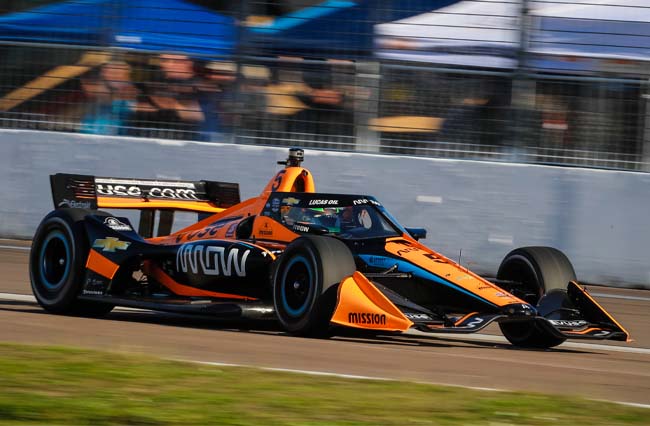 Speaking ahead of the race the Mexican said:

“I always have enjoyed coming to Long Beach. I haven’t quite had the preferred weekend there in the past so I hope that the third time’s the charm! We have a lot to look forward to this weekend, especially getting back to work with the team and turning our championship around as we look to challenge at the front.”

Felix Rosenqvist in the No.7 Vuse Arrow McLaren SP Chevrolet is looking forward to the race this weekend saying:

“It’s good to be back in Long Beach. There were a lot of emotions last year here for the team, but I think it was one of our stronger tracks in general; especially from my side. I thought we had a really good package at the end of the year. It’s good to be back and race at another street course. We’ll see if we can get the season going a little bit, as it’s been a disappointing start for all of us, but we’re ready to turn this ship around. I’m excited to go back West again.”

“We’re really excited to get back to Long Beach. It’s a place we’ve had success at in the past and we always love going back there and seeing the fans; it’s such a great event. Long Beach has a fantastic history with the NTT INDYCAR SERIES and is one of those events that we always mark on the calendar. We’re looking forward to getting back to racing after another break, and we’re ready to get our season kick-started with a good result this week.”