I Really Felt Connected To The Car 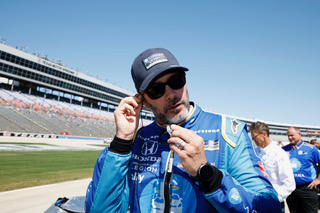 Chip Ganassi Racing’s Jimmie Johnson in the No.48 Carvana American Legion Honda says that he felt connected to his car as he came from 18th on the grid at the Texas Motor Speedway for the XPEL 375 to finish the race inside the top ten in sixth place.

“I really felt like, once I started running the ovals, I’d be able to prove my competitiveness. I took my time in the race, and as the race developed I grew more confident in the car, with traffic, with my [adjustment] tools, all the little pieces that you need to do well. This equipment at Chip Ganassi Racing is ‘spot-on’, it was just me trying to figure it out. About mid-race today, I finally felt connected to the car and what to do with the adjustments and traffic, and off I went.”

Marcus Ericsson scored his best oval finish in the NTT IndyCar Series as he ended the race on the podium behind the Penske duo of Josef Newgarden and Scott McLaughlin.

“It was a really good day for us. We had good pace at times, but car could become quite tricky to drive and we really had to stay on top of it. It was fun out there, the track was a lot better than in recent years, so thanks to INDYCAR for making it a lot more race-able. There were some fun wheel-to-wheel battles out there. So to get my first oval podium feels really, really good. I spent a lot of the off-season working on my oval performance, so to start off with a third is very good for us.”

“Racing can be pretty brutal. We all work hard to get to the top step. But today, we didn’t
quite do that. I guess it’s a good sign to be a little disappointed with a podium finish. It shows the
progress we’ve made and the standards we have set as a team over the past few years.
However, this game is pretty straightforward, we re-group, look to progress and move forward.
On to the Acura Grand Prix of Long Beach.”