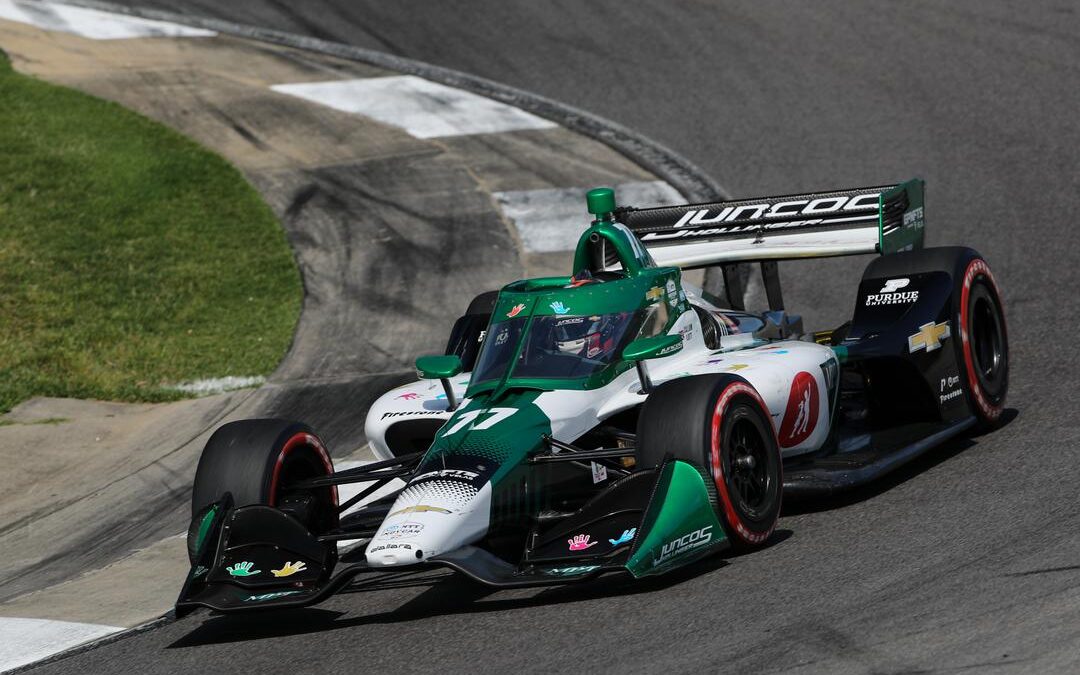 Juncos Hollinger Racing’s Callum Ilott in the No.77 Racing For Children Chevrolet was the fastest driver in the final practice ahead of Sunday’s Honda Indy Grand Prix at Barber Motorsports Park. The Englishman set the fastest time of 01:07.0906s.

Takuma Sato in the No.51 Nurtec ODT Dale Coyne Racing with RWR was seventh with a time of 01:07.5935s ending the session just ahead of Rahal Letterman Lanigan Racing Christian Lundgaard in the No.30 Shield Cleansers Honda who set a time of 01:07.7778s.

David Malukas in the No.18 Dale Coyne Racing with HMD Motorsports was ninth with a time of 01:07.7849s while Colton Herta in the No.26 Gainbridge Honda rounded out the top ten.

Championship leader Josef Newgarden in the No.2 PPG Team Penske Chevrolet was 11th with a time of 01:07.9304s ending the session just ahead of Ed Carpenter Racing’s Conor Daly who spoke following the qualifying today saying:

We had sectors quick enough to transfer to the next group, but we ran into a lot of dirt because of another car that went off in front of us. Then there was a red flag, so we couldn’t get in any more laps. We had a great car, fast enough, obviously, since our teammate is on pole which is wonderful. I’m still excited for tomorrow, we know we are fast, we just got a bit unlucky today.

“It was a solid day for Arrow McLaren SP. We had a strong qualifying and we can do a lot from there. We are starting second tomorrow and the car has felt good and comfortable. We will have to see what the best strategy is going to be in the race; I think the weather is going to have a lot to say about that. We are looking forward to having a good race tomorrow.”

Romain Grosjean was P17 just ahead of Simon Pagenaud and Kyle Kirkwood who commented after qualifying saying:

We didn’t have the best of qualifying, we finished 11th in our group,” said Kirkwood. “Not sure what the issue was. Honestly the [car’s] balance felt pretty good, we’re just lacking speed there towards the end on red tires. I think our race pace is good. We’re going to find out here in warmup but tomorrow might rain so that could throw a curveball at everyone and that could potentially help us so we’ll see what happens.

Pole-sitter Rinus VeeKay ended the session in 20th place and speaking following the action he said:

Very good qualifying! We put the SONAX Chevrolet on pole, the Ed Carpenter Racing team did a great job. “We had potential and we knew we were in a good position, but to actually put it on pole was an accomplishment. I think the whole team maximized everything. We made the right decisions with tires, setup, everything. Confidence is high. I think from here we can have a great race and fight for the win, definitely.”

Graham Rahal and Devlin DeFrancesco were 21st and 22nd respectively ending the session just ahead of Arrow McLaren SP’s Felix Rosenqvist who stated:

“Another good qualifying and Firestone Fast Six appearance for the No. 7 Vuse Arrow McLaren SP Chevrolet. We have been on a roll in qualifying. Obviously you want to be better than sixth when you make the Fast Six but we will definitely take that position after what started as a tricky weekend. We got a pretty good read on both tires during the final practice so now we just need to execute tomorrow.”

Chip Ganassi Racing’s Jimmie Johnson in the No.48 Carvana Honda was 24th just ahead of Dalton Kellett who commented following the action saying:

“Not the qualifying session we were looking for,” said Kellett, adding, “It was the whole Foyt team really, we seemed to struggle out there. The car felt alright but the pace wasn’t there so that’s something to look at between the three cars and see what we can come up with for warmup. We’ll test a couple things for the race tomorrow. It probably looks like a two-stop race so we’ll be working on fuel mileage stuff and see what we can come up with from a setup standpoint.”

Tatiana Calderon rounded out the order after bringing out the red flag after running track and speaking following qualifying she said:

“I think we’ve been making steps forward,” said Calderón. “I’m more comfortable with the balance of the car. We still need to find a little bit more grip, particularly with the red tires so that’s something to work on towards the free practice three [final warmup] to prepare for the race. I think we’re making steps forward and that’s the most important thing. We’ll see what the weather does tomorrow,” she offered, adding with a smile, “It should be an interesting race.”