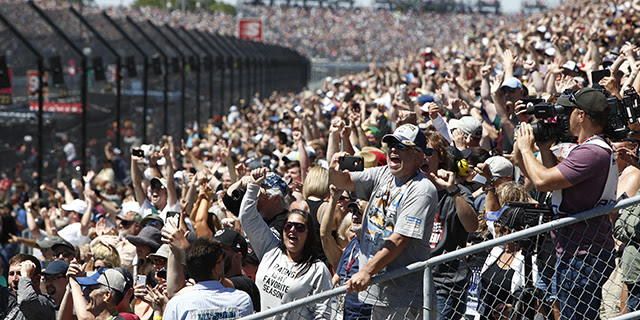 The Indianapolis Motor Speedway released the schedule for next month’s events at the GMR Grand Prix of Indianapolis on the Speedway road course and the track action for the 106th running of the Indianapolis 500 presented by Gainbridge which takes place on Sunday, May 29.

Fans can enjoy 11 days of on-track activity on the IMS road course and the historic, 2.5-mile oval. Action on the road course for the GMR Grand Prix will start Friday, May 13, with the practice for the Indianapolis 500 starting Tuesday, May 17 on the oval.

NTT INDYCAR SERIES drivers will line up to take the green flag for “The Greatest Spectacle in Racing” at 12:45 p.m. (ET) Sunday, May 29 on the historic, 2.5-mile oval (live on NBC, Telemundo Deportes on Universo, INDYCAR Radio Network). The ninth GMR Grand Prix will kick off the Month of May at IMS at 3:30 p.m. Saturday, May 11 on the 14-turn, 2.439-mile road course (live on NBC, Peacock Premium, INDYCAR Radio Network).

Team Penske head into the Month of May aiming to score their sixth victory on the Indianapolis Motor Speedway road course.

Looking ahead to the month of May, Indianapolis Motor Speedway President J Douglas Boles commented saying:

“We have looked forward to a ‘normal’ Month of May for more than two years, and we can’t wait to see all of our loyal fans at the Racing Capital of the World. “But as anyone who has attended even one Indianapolis 500 or GMR Grand Prix knows, there is nothing ordinary about this magical time of the year at IMS. It’s so special, with action, excitement and memories every single day. We truly welcome everyone back home again.”

Among the highlights of the Month of May at IMS is an exciting new format for PPG Presents Armed Forces Qualifying on Saturday, May 21 and Sunday, May 22.

After Day One of qualifying from noon-5:50 p.m. (ET) Saturday, May 21, Day Two will include two rounds of qualification attempts to decide the first four rows, including pole position.

Starting in reverse order of speeds based on Day One, each of the top 12 drivers will have a guaranteed attempt to post a traditional four-lap qualifying time starting at 4 p.m. The fastest six will advance to the Firestone Fast Six at 5:10 p.m. to determine positions one through six and compete for the NTT P1 Award for pole. The slowest six will fill out starting positions seven through 12 according to their recorded time.

In the Firestone Fast Six, each entrant is again guaranteed one attempt and will qualify in reverse order based on their Top 12 qualification results. The fastest wins pole position, which includes a $100,000 prize, with the remaining five drivers filling out the remainder of the first two rows.

A post-qualifying practice from noon-2 p.m. Monday, May 23 will give fans another opportunity to see NTT INDYCAR SERIES drivers hone setups in traffic before Race Day.

Miller Lite Carb Day will feature the final practice before Race Day, with cars on track from 11 a.m-1 p.m. Friday, May 27. The popular INDYCAR Pit Crew Challenge also returns after a two-year hiatus, rewarding the fastest crews in the sport and putting their talent in the spotlight from 2:30-4 p.m.

A great variety of live music also will complement the exciting on-track action throughout Race Weekend.

Rock’s ultimate supergroup Kings of Chaos and legendary Grammy Award winner Rick Springfield will co-headline the Miller Lite Carb Day Concert on Friday, May 27. Legendary funk and R&B band Morris Day and the Time will open the concert, followed by Springfield and Kings of Chaos. The show starts at 3:30 p.m. on the Miller Lite Stage inside Turn 3 of the IMS oval, a new location this year.

Country music superstar Dierks Bentley will headline the Firestone Legends Day Concert on Saturday, May 28. Special guests Ashley McBryde and Dillon Carmichael will open the show, which begins at 7 p.m. (ET) at the TCU Amphitheater in White River State Park, further expanding the celebration of “The Greatest Spectacle in Racing” into downtown Indianapolis.

Superstar DJ and producer Martin Garrix will headline a stellar lineup of global electronic music artists at the Indy 500 Snake Pit presented by Coors Light on Sunday, May 29. deadmau5, Galantis, Steve Aoki and Yellow Claw also will perform at the Race Day concert during the 106th Indianapolis 500 presented by Gainbridge. Performances begin at 8:15 a.m. in the infield adjacent to Turn 3 of the IMS oval.

(All times local, subject to change; all on-track activity on IMS road course)

(All times local, subject to change; all on-track activity on IMS oval)

MONDAY, May 23 (General Admission $15; Infield Access Only for Fans)