It Was A Really Good Day 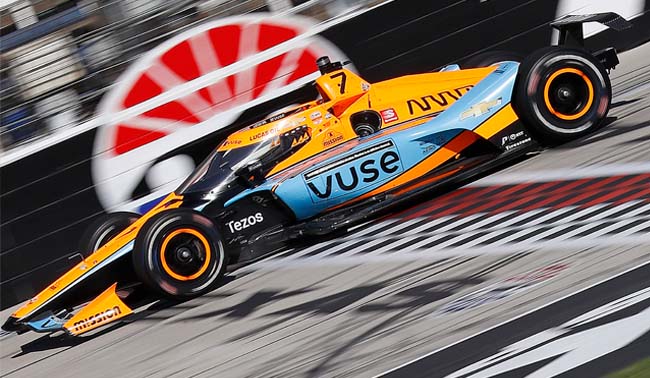 Arrow McLaren SP’s Felix Rosenqvist in the No.7 Vuse Arrow McLaren SP Chevrolet had a really strong qualifying session for the XPEL 375 at Texas Motor Speedway as the Swede will start the 248 lap race from pole position and in doing so has secured his second career NTT P1 Award.

“It was a really good day. A lot of driving in one day, but I think we were up there in every session. I was able to get my first pole with Arrow McLaren SP and my first pole on an oval. It’s a great feeling. To get a pole on an oval is something I think is really special. There’s so much commitment for those two laps, it brings a lot of joy. The entire No. 7 Vuse Arrow McLaren SP team deserves after a tough couple of months. Now we have the best view for Turn 1 tomorrow. Texas is a place you want to start up front because it’s always a mess. Being in the back is not fun here, so we will take advantage of being out front tomorrow.”

Pato O’Ward in the No.5 Arrow McLaren SP Chevrolet starts the race where he took victory last year from tenth place on the grid and speaking following the action the Mexican commented saying:

“It’s good to be back at Texas Motor Speedway. In qualifying, we misjudged the gearing a bit, along with a couple other things that would have gotten us closer to the speed of the No. 7 car. We can definitely fight from 10th, that’s not going to be an issue. I know how to race around here and the No. 5 Arrow McLaren SP Chevrolet feels really good. It reminds me of last year, so looking forward to going forward tomorrow.”

We are feeling really good. It was a long Saturday. This type of format is difficult on the team, specifically the mechanics and engineers. They have to crank out a lot decisions and actions very quickly. I think the key to that is all the things we can do off track to give us a strong package when we arrive at the track. That had both Arrow McLaren SP Chevrolets starting in a good place.

“Felix getting the pole position was overdue and well-earned. I’m very happy for him and the No. 7 group. Both cars, at the end of the day, are race ready. They are both good in traffic. Pato’s feels very similar to where he was last year, so that is a good sign considering we won last year. Who knows how things are going to fall tomorrow, but we are positioned well for the race.