It Was A Scrappy Session 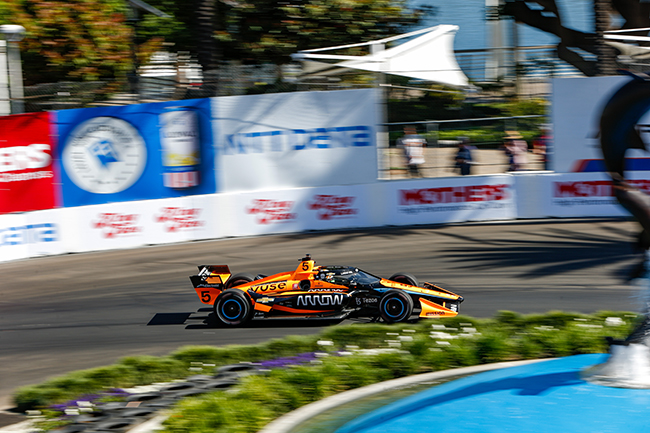 “It was a scrappy session. A lot of drivers off the track and Pato made contact with the wall on the left-rear of the car. The No. 5 Arrow McLaren SP crew did a good job of fixing him up to get him back out, but we only got a few laps so it was really hard to get a read on where the car is at. For Felix, he only ran one set of tires in the session. He hit traffic on some of his good laps, but overall it was just a messy session. However, I think both cars are good and we will make some improvements overnight. We expect track conditions to change drastically heading into the weekend, so no real concern or alarms at the moment. Tomorrow, we just need to have a clean session and makes things easier on ourselves.”

Pato O’Ward set a time of 01:08.4147s and speaking following the action he commented saying:

“It was a challenging day for us. I had a little mishap in the first couple laps which made it hard to get as many laps as we wanted. The crew did a good job of fixing things and getting another set of tires on the car to continue our baseline run. It was very different than it usually is with different rubber on the track which influences the balance of the car. Tomorrow will be a little bit of a guessing game to see how the Firestone rubber will react with the other compounds that are out there. We will see if it helps us balance out the car and get it a bit more in the window.”

Felix Rosenqvist set a time of 01:08.4615s and speaking following the action he said:

“Today’s practice was a really busy session. We didn’t get the lap put together, to be honest, because of the traffic and a lot of red flags. I thought the car felt good, but it’s hard to say when you don’t have a reference lap in. It’s still fairly early and we will see how it is tomorrow to get a better read on the No. 7 Vuse Arrow McLaren SP Chevrolet.”