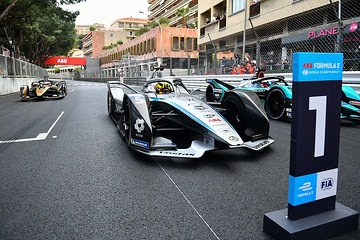 It’s a fantastic feeling. Monaco is one of those very special races that every driver wants to win. We had a tough weekend here last year but we really managed to turn things around this time. Our goal was to qualify well up the field, and after that, it was obvious to me that we could be top contenders as well. And that’s how it went. We were really flying today, so many thanks to the team for putting such a strong car at my disposal. My start to the season wasn’t easy, but consistency is paying off now. I’m really pleased about that. I feel like I’ve been fighting up front all season. I’ve had a few pole positions but couldn’t quite convert them into wins, so this weekend, I decided not to qualify on pole but to go for victory instead, and that strategy worked.

Unfortunately, the race didn’t go as I’d hoped. It was maybe just one of those days where things go from bad to worse, but still, I think we had great pace today. We were strong in energy management, got a great start and gained a position. But then sometimes, things just don’t come together subsequently, and that was the case today. Fortunately, Stoffel had a terrific race and achieved a win for the team. I’m really pleased about that for the whole team, as every individual member of the outfit had truly earned it with all their hard work. I will now try to hit back at the next race weekend in Berlin.

Wow. What a race that was: a win for the team in Monaco! Monaco hasn’t been too kind to us in the past. Especially after the disappointment of last year we came here with a real determination to turn things around. We did that probably in the best way possible: winning the race with Stoffel. This will be a great memory for the whole team – and something he personally will for sure remember for the rest of his life. The performance of the team as a whole was great here. Both drivers had praise for how the car felt in the practice session, however qualifying didn’t quite go as we had hoped. Starting the race from P4, Stoffel was in a good position to fight for a podium from the off, sticking to the team’s strategy and capitalising the opportunities along the way. Every moment that was thrown at us we managed to turn into a positive, whether a full course yellow or a safety car period. Nyck had a very solid morning, but unfortunately couldn’t optimise the qualifying session, ending up on P8 on the grid. That is never the most optimal position to start from with such a tight field. Nevertheless, every single point counts towards something: the fight for the championship. And that is exactly what not only the drivers, but every team member is working for. You know what they say: in the end of the day it’s the race that counts. And boy, did we make it count.