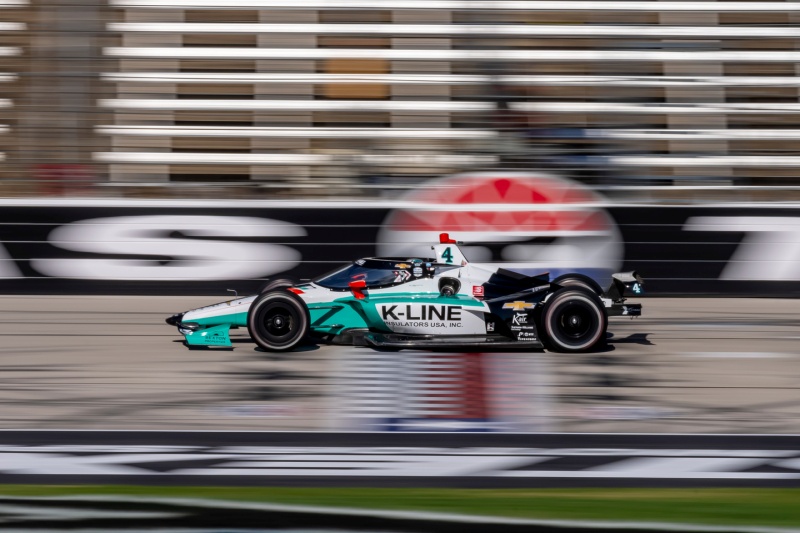 Dalton Kellett in the No.4 K Line Insulator Chevrolet was the highest placed AJ Foyt Racing driver in qualifying for Sunday’s XPEL 375 at Texas Motor Speedway as the Canadian starts the race from 22nd place with a speed of 219.038mph.

I think we definitely made an improvement from last year, but we’re definitely not starting where we’dlike to for the race. “Track conditions are going to be super important and I think it is still going to be tough to pass even with the adjustments to the downforce level and the high line testing they’re doing later, so we’ll have to be a hundred percent sure our race car is good to go and that we’ve got a good car for the long run. (We) Have to make good calls on the strategy and execute well, don’t make mistakes, be good in the pits. Those things will be the most important things for us to focus on during the race and take opportunities as they come.

Kyle Kirkwood in the No.14 ROKiT Chevrolet starts his first IndyCar Series oval race from 23rd place and speaking following the action he said:

I think the qualifying run that we had was good, there were no mistakes made. “We went with the car that expected it to be but for some reason we just didn’t have the pace. I’m not sure why, we’ll have to dig through the data to understand what that was but regardless I think we’ve got a really good race car. We were able to fight with the guys when we were here testing, I was able to pass a couple guys on track earlier today in practice, so hopefully that translates over to the race. We have another practice s that will be the true teller of where we actually set for the race. Qualifying is one thing but the race is completely different.

J.R Hildebrand in his first race of the season in the No.11 ROKiT Chevrolet starts the event from 26th place with a speed of 218.584mph and speaking following the action he said:

Obviously not where we’d like to be starting the race but we’ll look into it and figure out what we’ve got going on. “Between all three cars, we didn’t really find the performance that a lot of the other teams have. We’re not the only team that couldn’t figure it out either, so that’ll be something that maybe is less relevant for tomorrow, but good for us to do a little research into it so we can figure it out. “Now it’s all about getting the cars tuned up for the second practice here so we can feel good going into the race. “It’s going to be a tough race tomorrow, conditions are going to probably be kind of lousy just with the wind but for us at this point that may be something for us to lean into for a little bit. It’s not going to be great for anybody out there. If we can just outlast people, if we can keep our heads about us and be smart throughout the race, that usually counts for something in these situations, so looking forward to that. It’s going to be a grind for us but sometimes that’s why you show up, so we’ll see how it goes.”