Ecurie W’s Emma Kimilainen took her second W Series career victory at the Spa Francorchamps circuit in Belgium on Saturday following a dramatic race. The 32-year-old Finn who started the race from fourth place made a cracking start to the event getting past championship leaders Jamie Chadwick of Veloce Racing and Racing X’s Alice Powell and went on to dominate the race which had been delayed due to the red flag during qualifying for the Belgian Grand Prix F1 race. Speaking following the race, Emma said:

“This is such an amazing feeling! I had a really good car and I have to thank my engineer, driver coach and mechanic for getting everything spot on today. The Ecurie W team is rocking and this track is just amazing – it’s great to be here and race in front of this lovely crowd. More wins are what I’m aiming for in the remainder of the season. It hasn’t been the easiest start to the year for me, but anything can happen from here and I’m still aiming for the title, that’s for sure. If you want to win, get the Finn!”

Veloce Racing’s Jamie Chadwick extended her lead in the championship to seven points over Alice Powell. Jamie started the race from pole position but had to settle for second following Kimilainen’s fantastic race and speaking following the event, Chadwick commented saying:

“I had no answer to Emma [Kimiläinen] today. She was really impressive and just seemed to be able to use better parts of the track for the tyres. From my point of view, it’s still a good day for the championship because I finished ahead of Alice [Powell] and, all things considered, I’m just happy to come through that race unscathed because it was pretty tricky out there. I wanted to go racing when we started behind the safety car, but we managed the situation well and Emma [Kimiläinen] simply did a better job today so all credit to her.”

Puma Sports Marta Garcia completed the podium having come from sixth place on the grid and speaking following the race the Spaniard commented saying:

“After such a hard start to the season, it feels great to be back on a W Series podium and I want to thank everyone for their support. I was struggling when I was behind Alice [Powell] because I was faster than her but it’s really tough to overtake in the rain, so I tried to keep the pressure on and managed to finally do a good move at Turn 15. I hope this is the first of a few more podium finishes this season.” 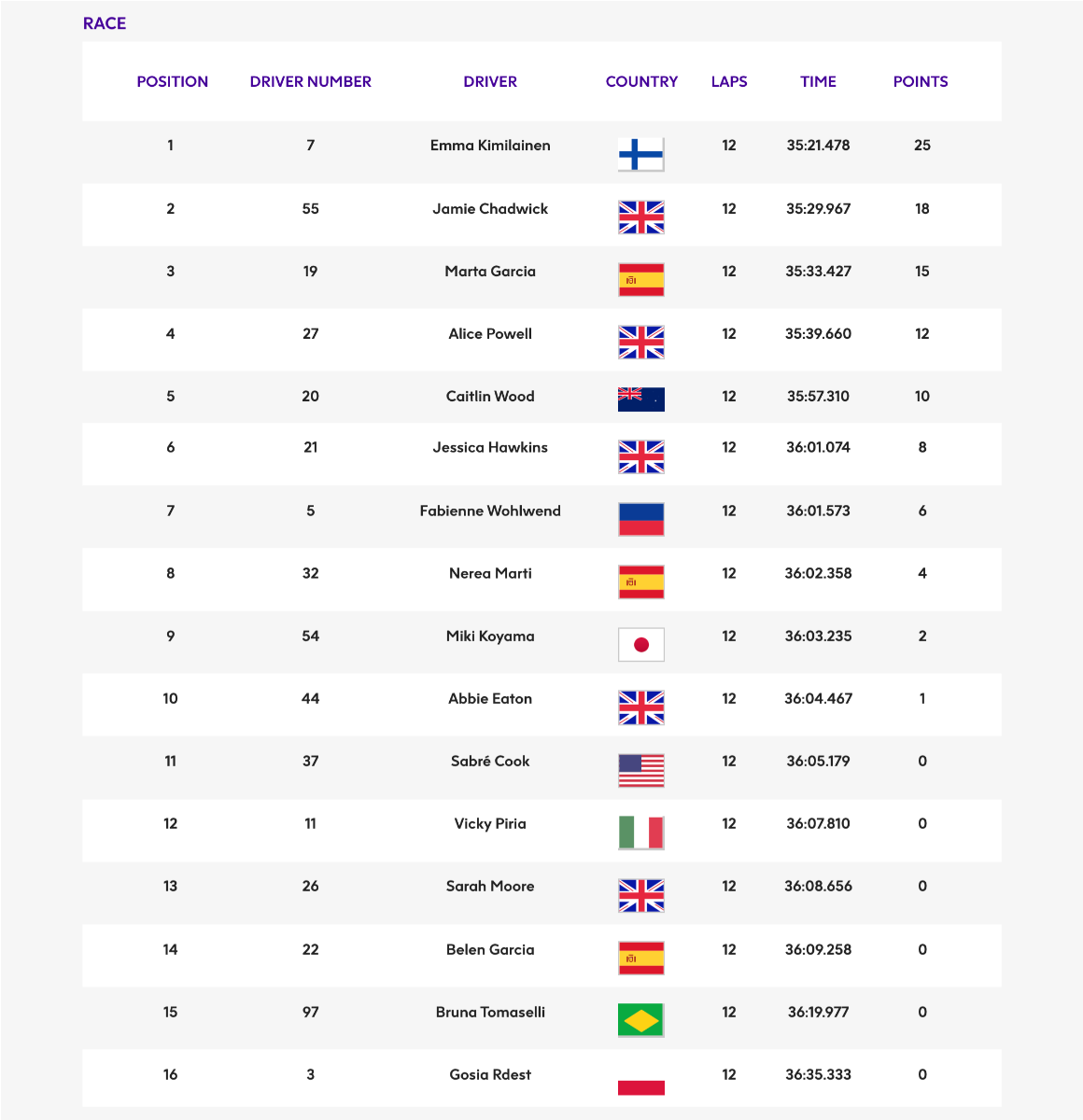 M Forbes Beitske Visser was not cleared to compete in today’s race following her horrendous accident during qualifying for the event on Friday when six cars crashed at the same point that McLaren Racing’s Lando Norris crashed at today. Speaking following the race on Saturday, Visser commented saying:

It was, of course, a very bad accident during qualifying on Friday – the worst I have been involved in in my career so far – but I’m glad I’m relatively okay. I still have pain, but luckily there are no fractures and that is a great relief.

“I was going towards Eau Rouge and then it suddenly started to rain. I saw two cars in front of me lost the rear and had already come off the gas but, because it was so wet, I couldn’t hold the back end either. I was praying I wouldn’t hit the others, then I saw several cars coming towards me and I was praying they wouldn’t hit me too hard.

“When I first saw the footage, I was shocked. In the car, I immediately realised it was a bad crash, but I didn’t realise how bad it was until I saw the footage. Fortunately, those images showed that I could get out of the car myself and that was nice because I could only call my family 40 minutes later.

“These cars are absolutely safe, although I was lucky this time. I was hit three times hard from different angles and still managed to get out of the car on my own, so I think someone was with me – I had an angel on my shoulder.

Visser’s teammate, Ayla Agren was also unable to compete in today’s race having been caught up in the crash and speaking following the race she said:

“I’m a little sore and bruised after the accident in qualifying yesterday [Friday] but, luckily, I have everything intact. My knees banged together and the right one is quite bruised, so it’s not the best now but I’ll be fine in a couple of days.

“It happened so fast. I came through Eau Rouge and saw Abbie [Eaton] locking up and thought: “that’s going to be a big one”. Then I saw Beitske [Visser] going around and I knew I was going to do the same. My rear started snapping and I braced myself for the impact before waiting for the next few drivers to arrive. It’s one of the scariest accidents I’ve been involved in because I was sitting there waiting for someone to hit me. I’m just happy that everyone’s okay.

“Massive thanks to everyone at the circuit and at W Series for their help. Everyone was calm and very thorough, and kept my family updated throughout. I wanted to race today and I passed the neurological tests but, according to the medics, I’m not quite ready to drive and they’ve been so professional. My aim is to be back in the car next week at Zandvoort and I’ll be trying to get lots of tips from Beitske [Visser] before we get there! 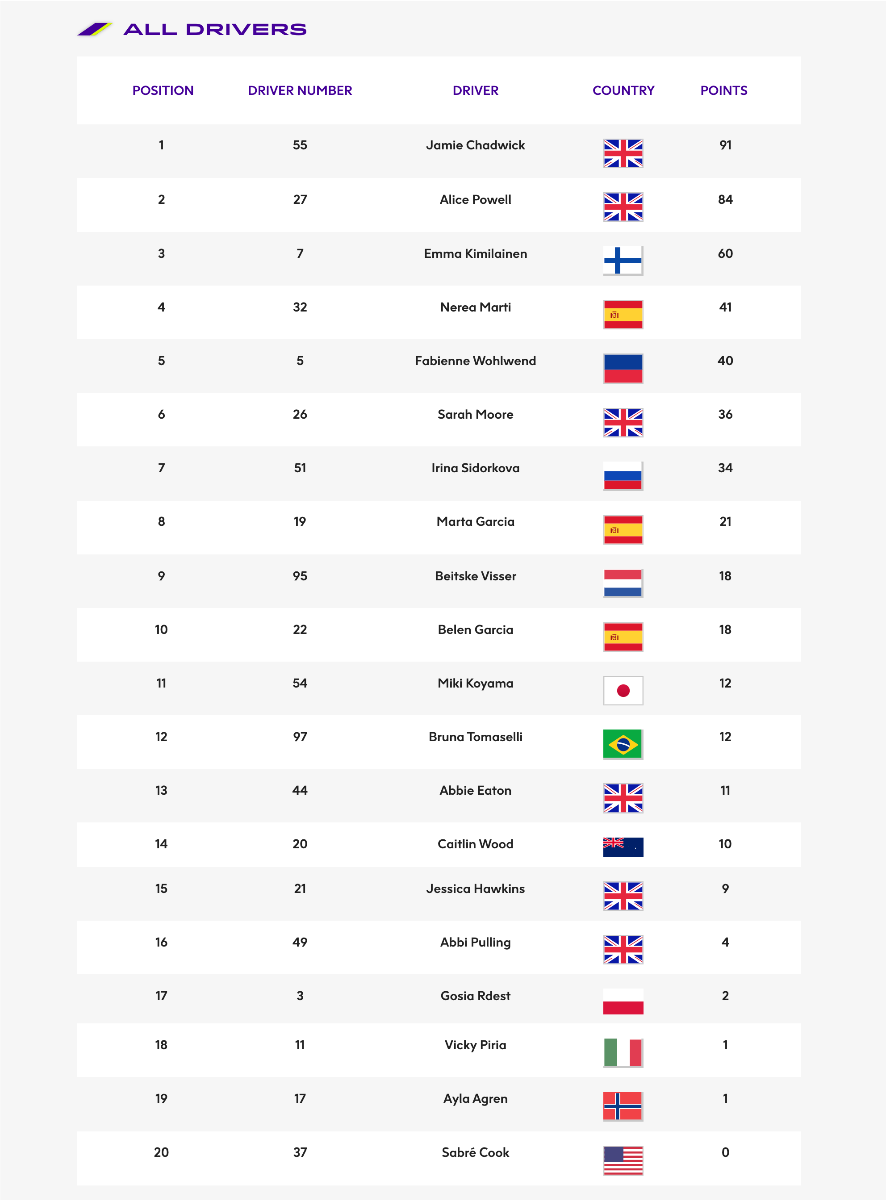