Leclerc Claims His Ninth Pole Of The Season, Verstappen P8 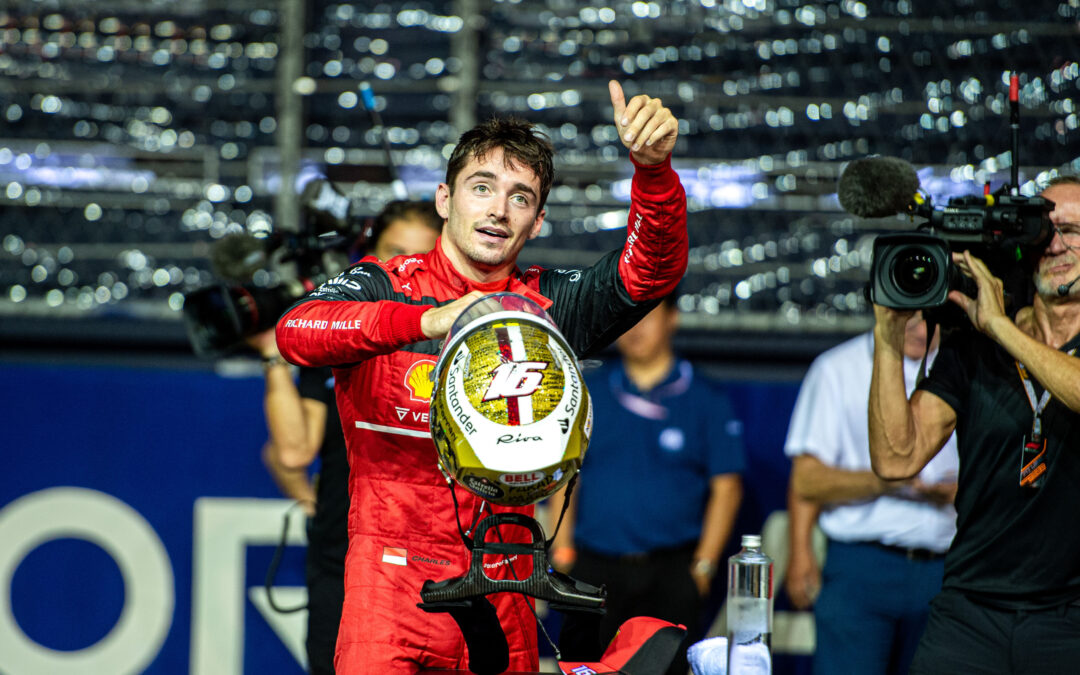 Scuderia Ferrari’s Charles Leclerc claimed his ninth pole position of the season for Sunday’s Singapore night race with a time of 01:49.412s and starts the race just ahead of Oracle Red Bull Racing’s Sergio Perez and seven-time Formula One world champion Lewis Hamilton in changing conditions during Saturday’s qualifying as Formula One took to the Marina Bay circuit for the first time since 2019.

With track conditions changing throughout, it was a tricky but exciting qualifying. We were very quick on the Intermediates in Q1 and Q2, then had to start again from zero on the slicks in Q3. There were some damp spots of tarmac here and there and you really had to adapt to the track evolution.
The feeling in the car has been great all weekend and I look forward to racing here again tomorrow.

Carlos Sainz in the second Ferrari starts the race from fourth place and speaking following the action he said:

It was a challenging qualifying today, one of the toughest of the season due to the conditions and the amount of traffic at a street circuit like this. I think we did a decent session overall, but it’s frustrating to see that a tenth and a half cost us four positions, especially after reviewing my fastest lap, which was looking very good for pole until a snap at turn 16. We’ll look into it and check what we could have done better, but now we need to focus on tomorrow. We can still get a very good result from here and we know how long and eventful these Singapore races can get. I’m ready to fight for everything.

Our car was very quick today, as were our drivers, which is a very important factor on such a unique track as this one, especially in what has so far been a difficult weekend for everyone with rain and extremely changeable track conditions. For the team and drivers to make the right decisions together in Qualifying was particularly tricky because of the really treacherous track conditions.
We were aiming to get both cars onto the front row, but overall this is an important result for the team, thanks to clear thinking between the drivers and those on the pit wall, which is good for everyone and gives the drivers confidence when approaching what will be a very long race.
There are several question marks about tomorrow’s race because, like all the teams, we have not done much work on race pace, so we will be less well prepared than usual. In fact, we had to improvise a bit in qualifying, but, here especially, that’s all part of the game. Charles and Carlos did a very good job of finding the right pace in many different conditions and tonight we will work together, looking at all possible scenarios.
I also think that today we did not see the best our rivals can do, so for tomorrow, not only must we execute our race perfectly, we also have to find a pace during the Grand Prix that will put us in the fight for the win.

Fernando Alonso had a great qualifying session as he starts the race from P5 having been extremely quick during each phase of qualifying. The two-time Formula One world champion starts the race just ahead of McLaren’s Lando Norris who commented following the action saying:

“A good qualifying, if very tough. It was probably the toughest conditions of the whole season. There are just such fine limits between it going wrong and it going right. I think I took a good, but the correct amount of risk, and it paid off with a P6, which is better than we were expecting. Tough, challenging, but very happy with how today’s turned out. A good position for tomorrow and hopefully we can turn it into some good points.”

Pierre Gasly starts the race from seventh just ahead of defending Formula One world champion Max Verstappen who commented following the action saying:

“We couldn’t finish the push lap today because we wouldn’t have had enough fuel in the car, it was a mistake that we didn’t see coming throughout the session. We were a little surprised by the additional lap at the end, we didn’t expect to have to do that. I was on for a good lap when I aborted before starting the last lap, it might have been pole. In hindsight we should have finished the penultimate lap, instead I had to abort two laps, but hindsight is a great thing. We’ll see what we can do tomorrow but I think it will be a frustrating race, starting eighth around here is similar to Monaco, there aren’t many overtaking opportunities and it’s really hard to pass.”

George Russell starts the race from eleventh place for Mercedes after failing to make it out of Q2 with a time of 01:54.012s, and starts the race just ahead of Lance Stroll and the Haas F1 Team’s Mick Schumacher while Sebastian Vettel starts his final Singapore Grand Prix from P14 for Aston Martin Aramaco Cognizant Formula One Team and speaking following the action the German said:

“I think with hindsight it is easy to say that we made the switch to dry tyres too early, but it was a very close call. We discussed it and made the decision together and maybe I should have trusted my instincts a bit more. When I was on the soft tyres in the final moments of Q2, I had to really attack on the dry parts of the lap. I had a lock-up early on in the lap, but I think the final sector of the lap was still too wet anyway. For tomorrow, it would be helpful to have some more rain to mix things up again, but I think we have quite good race pace so we will try our best to challenge for points-paying positions.”

Zhou Guanyu who will remain with the Alfa Romeo Racing team in 2023 starts the race from P15 just ahead of his team-mate Valtteri Bottas and McLaren Racing’s Daniel Ricciardo who commented after the action saying:

“It’s obviously disappointing to be out in Q1 but to be honest it’s more frustrating that it didn’t feel like the same car as we had this morning. I know the track is a bit drier now but the slight change in conditions basically made us much less competitive. That’s where it’s really so hard to get a read on it. This morning I was quite comfortable with the car, all things considered, and even my first lap in Q1, I felt better than I did at the end when the track started to dry. That’s obviously somewhere we miss out, when the track does improve, and we can’t really run with it. That’s really costly and I’m more disappointed in that fact than I am about the overall position. There were no big mistakes or anything like that, it was simply that we couldn’t go quick enough through the corners and make the most of it. We’ll see what happens tomorrow though with strategy and the weather and move on from there.”

Esteban Ocon starts 18th just ahead of the Williams pairing of Alex Albon and Nicholas Latifi who rounds out the order.