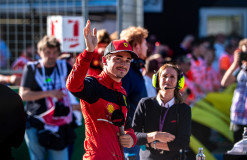 Defending champion, Max Verstappen came home in second place while Lewia Hamilton came from eighth on the grid to complete the podium.

George Russell had a great race as he ended the race in fourth place just ahead of Esteban Ocon and Mick Schumacher who claimed another great haul of points for the Haas F1 Team.

Lando Norris was seventh just ahead of Kevin Magnussen in the second Haas.

Daniel Ricciardo was ninth for McLaren while Fernando Alonso is like to receive a penalty for a pitlane violation which will likely promote Valtteri Bottas to tenth place.

Alex Albon was P11 just ahead of Lance Stroll and Zhou Guanyu.

Sebastian Vettel was demoted to last in the race while Pierre Gasly came home just ahead of Yuki Tsunoda.

Next up is the French Grand Prix which takes place from July 22-24.