Lights To Flag Victory For Leclerc 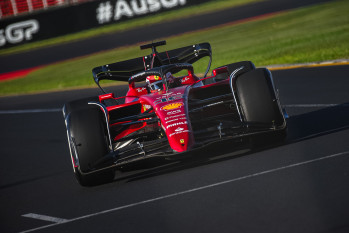 Scuderia Ferrari’s Charles Leclerc took a lights to flag victory Down Under as Formula One returned to Australia for the first time since 2019.

Leclerc who started the race from pole led all 58 laps of the race and came home just ahead of Red Bull Racing’s Sergio Perez while George Russell scored his maiden podium for Mercedes coming home in third place.

What a great victory this was for us! We managed our pace well and were extremely competitive. We didn’t suffer from tyre degradation, even when pushing hard. The car was just amazing and I’m very pleased with how my race went.On paper, this was a track that we expected to be tough for us, so we have to review our data because we were in fact very strong.It’s a great way to start the season, but we have to keep in mind that we are only three races into a very long championship. We can’t afford to relax at any moment and have to stay on top of things, most of all on development.Congratulations to everyone on our team. What an amazing job you have all done! I’m very proud of how far we’ve come and can’t wait to continue fighting. Forza Ferrari!

Lewis Hamilton came home just behind Russell while it was the best race of the season to date as Lando Norris and Daniel Ricciardo came home in fifth and sixth place respectively.

Esteban Ocon came home in seventh just ahead of Valtteri Bottas and Pierre Gasly while Williams Racing’s Alex Albon picked up the team’s first point of the season after working his way to P7 before making his one and only pit-stop on the final lap of the race.

I’ll take those two points today! It’s been quite an unfortunate race for me, I managed to pass two cars at the start, but then I got unlucky pitting right before the safety car and dropped to P14. I was pretty mad at the time, but I stayed focussed and managed to come back through to P9. I had a nice battle with Lance which I enjoyed, it was pretty intense on a track like this, but in the end I got the best of him. Objectively, it’s been a tough weekend for us, so I think we can be quite happy with the result and to leave with two points. I still feel like we’ve got a few things to improve on, we’ve got some new parts coming in the next few races, so we’ve got to keep up with the others if we want to keep fighting for these positions. We would like to be a bit further up in the order, so we’ll keep pushing.”

Yuki Tsunoda was 15th just ahead of Nicholas Latifi while Fernando Alonso was classified in 17th place despite retiring towards the end of the race.

Max Verstappen suffered his second retirement in three races with a possible engine failure. Speaking to Sky Sports F1, Christian Horner, Team Principal and CEO of Red Bull Racing said they won’t know what happened to the car until they get it back to the UK on Tuesday.

Checo drove an exceptional race today with some stunning overtakes to secure his first podium of the season and bag some solid Championship points. But it was very much a day of mixed emotions with Max not finishing. We think it was an external fuel leak and we need to understand exactly what has caused that failure, so it was a very frustrating race in that respect. But we are in this as a team and we will bounce back. We didn’t have the pace of Ferrari today, so congratulations to Charles. It’s a long season ahead and we have the basis of a quick and competitive car, but we need to get on top of these issues quickly and we will keep pushing.”

Sebastian Vettel’s miserable weekend came to an end after he hit the wall causing damage to his Aston Martin while Carlos Sainz retired early from the event.

My lack of race experience with this car did not help today. I was pushing a little too hard and I lost the car on the kerbs at Turn Four and could not prevent the impact, which is very frustrating. Every lap in race conditions counts because this was my first time racing this car, so it is a shame not to have completed the race. We know that the car is challenging, but we are continuing to search for solutions to add more performance. Things did not go our way this week, but it is time to move on and I am confident that we can come back stronger at Imola.”