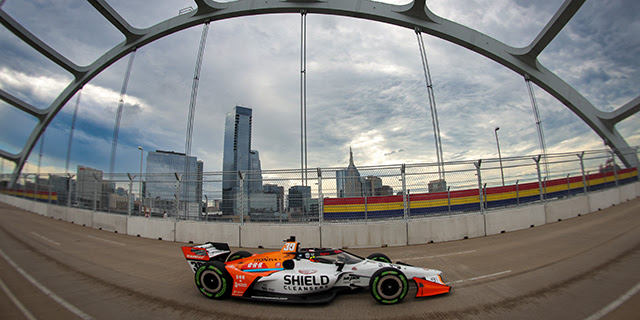 Rahal Letterman Lanigan Racing’s Christian Lundgaard in the No.30 Shield Cleansers Honda was the fastest driver on the opening day of track activity as the NTT IndyCar Series returned to Nashville for the Big Machine Music City Grand Prix on Friday. Speaking following the action he said:

“I’m super happy being up here now. “We were there last weekend. To start this weekend here is obviously great, but we have qualifying and the race coming up. We need to be as efficient as we’ve been the last couple of races, making sure everything is right, just executing the package now we know we have the package.

“Toronto was a good weekend. We came here with a similar car. It works, so I’m super-hyped to see if we can continue this path.”

The Dane set a benchmark of 01:15.9659s ending the day just ahead of Arrow McLaren SP’s Felix Rosenqvist who spoke to Paddock Eye following the action and said that he hopes that the No.7 Vuse Chevrolet team can kick some *** this weekend.

Speaking about the Guayule tire that has been introduced by Firestone this weekend, Rosenqvist said that he feels that the tire is more durable than the alternate tire as there is less deg however, he said that it is hard to judge the performance of the tire after just one session so far.

Dale Coyne Racing with HMD Motorsports David Malukas had a great session as he was third fastest with a time of 01:16.2366s ending up just ahead of Team Penske’s Scott McLaughlin and Josef Newgarden. Speaking following the action, Malukas said:

“All the changes we made went in the right direction, especially when we put the alternate tires on it. “It ended up being very smooth.”

“Good to be back here in Nashville. The track seems to be pretty much the same, which is nice. We struggled with some braking issues but the team did a good job changing them during the session, which is never an easy task. The new, green alternate tires, I think, are fine. The performance seems to be a good step from the primaries.”

Championship leader Will Power in the No.12 Verizon 5G Chevrolet was seventh fastest just ahead of Colton Herta who suffered a clutch issue early in the session and speaking following the on-track action he said:

“The track today seemed very similar to last year, which is nice because I thought we had a very good car last year. It seems like there is a little bit to find, I’m not exactly sure where that is, but we’ll look tonight at things and figure it out.”

Alex Palou in the No.10 NTT DATA Honda ended the day in ninth place and speaking following the action he commented saying:

“Practice done here at Nashville. It was a lot of action – red flags, yellows, lots of traffic as always. The car was ok. It’s on the ballpark. We need to work a little more on it to try and make it faster. We have some time tomorrow before qualifying. It was bumpy as always but it’s fun to be back here in Nashville. It’s really warm so hopefully we get the good weather in, it doesn’t rain and we have a good day.”

Romain Grosjean in the No.28 DHL Honda rounded out the top ten just ahead of Marcus Ericsson who set a time of 01:16.9763s and speaking following the action he said:

“Practice here in Nashville was hot and toasty but it’s fun to be back here on the streets of Nashville. Some good memories from last year. The session was pretty messy with a lot of red flags and traffic, so we didn’t really get a lot of laps. Interesting with the new green Firestones, they were behaving a bit different than what we are used to.”

Simon Pagenaud was 12th just ahead of Callum Ilott and Pato O’Ward. Takuma Sato was 15th while six-time series champion Scott Dixon was P16 and speaking following the action the Iceman said:

“I think some of the updates to the track they’ve done a really good job, especially the transitions on and off the bridges. I think traffic was the fight for everybody. We had a good first run, the car did some good speed, but we didn’t get to run really on the reds at all. Had three or four good laps going and then got traffic. We’ll see what tomorrow brings.”

Kyle Kirkwood was P17 just ahead of Devlin DeFrancesco and the Rahal duo of Jack Harvey and Graham Rahal.

Ed Carpenter Racing’s Conor Daly and Rinus VeeKay were 21st and 22nd respectively while Helio Castroneves was 23rd just ahead of Jimmie Johnson who commented following the action saying:

“First practice in Nashville, nice to be back here in town. I enjoyed the pit stop competition yesterday and enjoyed seeing all of the fans. I’ve been racing here since the ‘90s and there is a ton of energy. The track has been improved some as well. They certainly have put a big effort into it. I just think these are old rough roads and crossing over the bridge is quite tricky.”