McFadden Expected To Return For Foyt At Laguna Seca 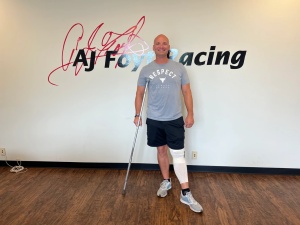 AJ Foyt Racing issued a further update on Chris McFadden the inside rear tire changer who was injured during Sunday’s HyVee Salute to Farmers 300 presented by Google.

In a statement released on Wednesday, AJ Foyt Racing said:

McFadden, the inside rear tire changer who was injured in a pit lane accident at Iowa Speedway on Sunday, stopped by the team’s race shop in Indy on Wednesday. He is aiming to be back in action for the final race of the season in Laguna Seca, Calif. It will depend on the progress he makes in the next 10 days as to when he can start seriously training. He plans to be at the Nashville race as an observer.