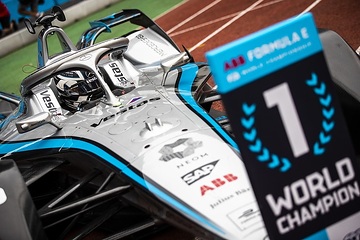 The Mercedes EQ ABB FIA Formula E World Champion team ended season eight and their involvement in the sport by winning the championship. Stoffel Vandoorne finished the final race of the season in second place which was enough to crown the Belgian driver season eight drivers champion in the 100th race of the all-electric racing series in Seoul.

“Wow, I’m speechless. It’s fantastic – the whole season has just been great. It’s an incredible feeling when you think about what we’ve achieved together this year. Thank you to the whole team for making this possible. The car was superb again today, and everyone in the team deserves this success. We have accomplished something very special together. Mitch gave everything right up until the end – he was always there. But in the end, consistency was the deciding factor: he won more races than I did, but I had the most podiums. As a team, we have achieved a level of consistency that has never been seen before in Formula E. I am incredibly proud of my team and our performance this season. It’s the perfect way to end the season, to be on the podium in the last race of the season, the 100th E-Prix in the history of the series, and to win both World Championship titles.”

Nyck de Vries was left disappointed as he retired from the final race of the season and speaking following the action he commented saying:

“A disappointing end to my race, but a fantastic result for the team. The only thing that counts today is that we won both World Championships. I’m obviously disappointed that I didn’t finish, but fortunately that didn’t change anything. I am very happy for the whole team. Congratulations to Stoffel, who’s had a fantastic season. He’s been very consistent and deserves the title. The team has done a great job over the years, and we couldn’t have asked for a better end to our journey together than this final result. I am super happy that we have managed to win both World Championship titles in each of the past two seasons. That’s a remarkable achievement in such a fiercely competitive race series. I’m not happy with the way my season went, of course, but it wasn’t always apparent from the outside what the problem was. It was a kind of snowball effect of small things that meant we weren’t able to score points on a consistent basis.”

“Wow! What a day and what a journey it’s been! Congratulations to the team, congratulations to Stoffel and congratulations to Nyck. Everyone has played such a vital role in us winning the team title. When the Mercedes-Benz board made the decision to enter Formula E four years ago, we didn’t know how it would turn out. Now we are sitting here and have won both World Championship titles for the second time in a row. This success we’ve had together in Formula E is just phenomenal. Congratulations to all the women and men at Brackley, Brixworth and Stuttgart. I have to admit, this is an emotional moment for me. Stoffel has done a fantastic job all year. He really deserves this title. But not only because of the title win, but also his development has been mega. The same goes for the team, everyone has been great. This achievement has only been possible because of the dedication and effort of all the team members in Brixworth, Brackley and Stuttgart. Together they have done it. With this work ethic. I’ve never seen anything like it before, but that’s what leads to results like this. We can’t wait to be back next season for a new chapter in our story as a team, but for now: I’ll be off to celebrate with the team.”

“I’m incredibly proud of all the team to have scored a consecutive double World Championship in Formula E again this year. An incredible achievement for an incredible team; and on top of that a 1-2 in the Teams’ Championship for Mercedes powered cars. That really shows the strength in depth of our racing organisations. Congratulations also to both our drivers, both having won a Drivers’ Championships on merit, and especially to Stoffel on today’s achievement after a season that was the picture of championship winning consistency. Mercedes-EQ are leaving the series on a high, and with great memories. It has definitely been a fun ride. Formula E – it was great to have met you!”

McLaren Racing will take over the Mercedes EQ entry for season nine of the ABB FIA Formula E World Championship.