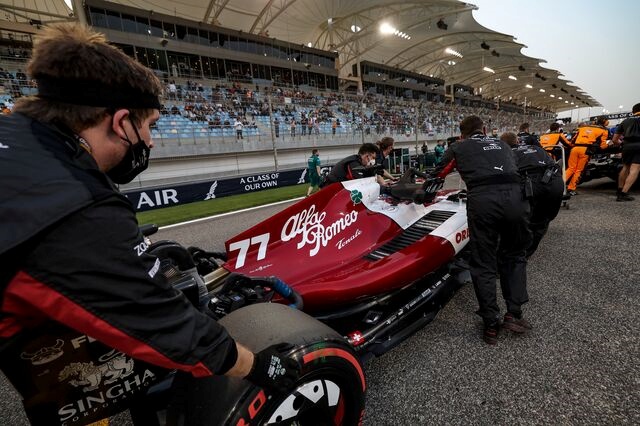 The Alfa Romeo F1 Team head to Saudi Arabia this weekend feeling motivated and galvanized by a wonderful season-opening Bahrain Grand Prix last weekend where both Valtteri Bottas and Zhou Guanyu scored points on their respective debuts for the Hinwil-based outfit.

Looking ahead to this weekend, Valtteri Bottas said:

It’s nice to be back in the car soon after a good result. It gives us the chance to build on the strong performance we showed last weekend and fix the things that can be improved. It’s still early days in the season and we expect the balance on track to shift backwards and forwards as teams bring updates, but we are not standing still either and we are determined to stay on top of this curve. I see real motivation in the team and it was super to see the delight on the faces of everyone there. We are going in the right direction and Saudi Arabia will be another race in which we can fight for a good result: the track has undergone some changes to make it even quicker than it was last year. I am looking forward to driving the new layout and see if that suits us.

Zhou Guanyu is aiming to continue the momentum up this weekend having scored points on his Grand Prix debut saying:

Starting with a finish in the top 10 is a dream come true, but now it needs to be a happy memory: my focus is already on the next race and on keeping performing well. Every time I step into the cockpit is a chance to learn something new and to get more comfortable in the car: I know I have to keep working hard, not just because I know how competitive everyone around me is, but also because I demand the best of myself in every occasion. The Jeddah Corniche circuit is not new for me, as I raced there in F2 last year, but of course it will be a very different experience in this year’s F1 cars. The layout has changed but it remains an incredibly challenging track which requires 100% focus and punishes mistakes: still, it will be something incredible to tackle it with these cars.

Starting the season with two cars in the points is a great feeling, and to be back on track within a week allows us to channel this enthusiasm and momentum into hopefully another good result. I was impressed, but not surprised, by how the team approached the weekend and by the level of confidence we had in our means: we know the whole team worked well during the year leading to this and we are eager to show the world what we can do. There is a clear feeling we have a competitive car and a determined pair of drivers, and this is boosting morale for everyone in the team. However, we are under no illusion about the challenge ahead: we saw how close the field is in Bahrain and how competitive qualifying and the race are. We know we need to be at the top of our game and deliver another good weekend: if we do that, having cars in the points is a realistic prospect.