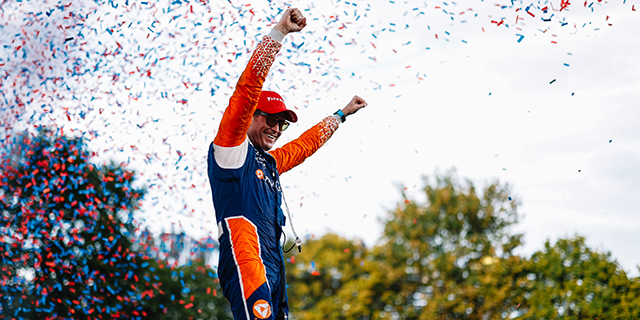 Six-time NTT IndyCar Series champion Scott Dixon in the No.9 PNC Bank Chip Ganassi Racing’s Scott Dixon scored his second victory of the 2022 season on Sunday in Nashville having come fro. 14th on the grid to finish in first following a chaotic race for the Iceman.

Kudos to the team. “We had a big crash there that took half the floor off the car. We had to take four turns of front wing out, so we had no grip. Nashville is so awesome.

The victory, Dixon’s 53rd of his incredible career sees him move into 2nd in the all time winningiest drivers list with AJ Foyt leading on 67.

“We were worried about him because I knew he would take chances. “He kind of has to with the standings at the moment. He was super fast, as well. He had fresh tires, too. I was a sitting duck. If there had been a lap or two more, it would have been really tough to do.”

We had to take four turns of front wing off, so we had no grip. I think we did about 45 or 50 laps on that last set of tires. Nashville is awesome and that was such a wild day. These ones are a lot of fun because it’s such a team effort and for all that we achieved