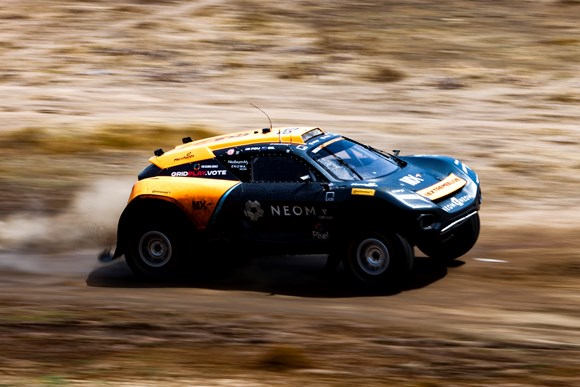 The NEOM McLaren Extreme E team head into this weekend’s second part of the Island X Prix aiming to bounce back from a disappointing event earlier this week which saw the team roll their car with Emma Gilmour while Tanner Foust rolled in the Desert X Prix finale.

Speaking ahead of this weekend’s event, Emma Gilmour said:

It’s been a tough first round here in Sardinia. We had really good pace in practice and we were looking to build on that, but an unfortunate DNF in Q1 put us on the back foot. In Q2, we had an unfortunate incident where someone ahead left us in the dust and made it so much more challenging to get through into the Semi-Finals.

“The Crazy Race is always a tough ask and probably even more so on this track. Four or five cars have got to go down into two shoots on the course and I sadly bore the brunt of it at the start. Thankfully, I am ok, just a bit stiff and sore. As a team, we are a really strong unit and we will come back fighting.

“I was really looking forward to Rounds 2 and 3 in Sardinia as I had never visited before. It’s very hot and dusty, but a very cool place to race. The surface is fun, rough and challenging. It’s a challenge on many levels for all the teams and so far, this weekend we have certainly had our share of challenges.

“We now have some work to do between events to get the car ready for Round 3, but the team is charged and I have no doubt we are going to hit the ground running into the second event of the double header.