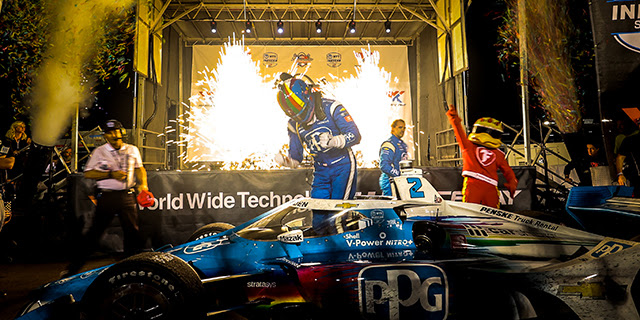 Two-time NTT IndyCar Series champion Josef Newgarden in the No.2 PPG Team Penske Chevrolet closed the gap in the race for the champion to just three points after claiming his fifth race win of the 2022 season at the rain-delayed Bommarito Automotive Group 500 at World Wide Technology Raceway on Saturday night.

The rain was red-flagged due to poor weather with 43 laps to go and just over two hours later it resumed with the majority of the field pitting for fresh Firestone rubber. Newgarden was battling it out with his teammate Scott McLaughlin with either one of the Team Penske drivers set to win however, Dale Coyne Racing with HMD Motorsports David Malukas spoilt the Penske party as he came up having run strong all night to overtake Will Power, Pato O’Ward and Scott McLaughlin to claim his maiden NTT IndyCar Series podium.

For Newgarden, who started the race from third place the result sees him in the lead when it comes to the number of victories this season having won at WWTR on Saturday, the Tennessee-native has also won at Texas, Long Beach, Road America and the Hy-Veedeals.com 250 at Iowa Speedway. Speaking following the race he said:

“I was so happy we could finish this race. “Scott McLaughlin, he wanted to win, too. I love that about us. We have a good relationship. He drove me super fair there at the end.

“We just had to have a good start. “I knew Scott was going to be good at the end there, and he had a great restart. I just tried to work the high lane. The high lane worked earlier for me. We just had enough to get by him. He was no slouch this weekend.”

Arrow McLaren SP’s Pato O’Ward was fourth just ahead of Takuma Sato who made it a great day for Dale Coyne Racing with both of their cars finishing in the top five. Speaking following the race, Scott McLaughlin commented saying:

That’s oval racing, and we love it. I want more of it. David’s (Malukas, runner-up) move on the last lap… credit to him. He’s a phenomenal young kid and I hope he goes far. The way he’s been coming up through the ranks and getting into the Fast Sixes, he’s been great all year. Full credit to him. The main aim for the team was a team win today. The Odyssey Battery Chevy was good. We all did our parts.

Will Power led a total of 128 laps of the 260-lap event but came home in sixth place just ahead of the Chip Ganassi Racing trio of Marcus Ericsson in the No.8 Bryant Honda, Scott Dixon in the No.9 PNC Bank Honda and Alex Palou in the No.10 American Legion Honda. The top-ten finish for Dixon sees him very much still in the championship race despite losing a place in the standings to Newgarden.

Speaking following the race, Will Power in the No.12 Verizon 5G Chevrolet said:

Once again, it was a good day with P6 in the Verizon 5G Chevy. Obviously, we wanted more. We made a mistake and didn’t take that yellow. That’s INDYCAR. It’s never straight-forward. You expect that in the championship. It might come back to us in the next two in a different way. That’s how it is. We’ve got some good tracks coming up. Like I predicted, it will be a tough battle all the way to the end. I’ve been around a long time and know how these things go. The best thing about today is that we finished in the top-six, so that’s still pretty good.

Graham Rahal in the No.15 iPacket Rahal Letterman Lanigan Racing Honda had a great day coming from 16th on the grid to finish the race in tenth place just ahead of the Andretti Autosport trio of Colton Herta in the No.26 Gainbridge Honda who finished the race where he started, Devlin DeFrancesco and Romain Grosjean.

”That was a tough evening. Actually, it started really good, up to P13 on the first lap from P26 so it was pretty mega at the start of the race. Then, I couldn’t really do much more. I just kind of sat there and couldn’t really pass. After the red flag, we went in to put on new tires – which lost us a couple of spots – but we hoped to get them back which we did. Then I got trapped on the inside in Turn 2, and I just got swallowed by like literally every car back to P16. We have to risk it in that position. It was not our weekend; it was a tough one. We’ll recharge for Portland.”

AJ Foyt Racing’s Kyle Kirkwood in the No.14 Bommarito Automotive Group Chevrolet ended his final oval race for the team before heading to Andretti Autosport next season in 17th and speaking following speaking following the action the Jupiter, Florida native said:

We gained some positions and overall had an OK race. We would have liked to have been further up on the field, of course. We made a couple of calls that probably didn’t play in our favor and ultimately we gained positions. We could have had the pace especially in the middle of the race when it was light out to do something a lot better with our car. Once it got dark, those were conditions we had never driven in before. We were more off the pace than we had been the entire day. That was unfortunate that we couldn’t capitalize on having new tires, maybe passing some cars and getting ahead of some people that we needed to. Nonetheless we’ll go into Portland with a clean car and a clean mindset.

Dalton Kellett who came home in 18th place commented on the race saying:

We started 24th and finished 18th, so I’m happy we were able to make up some spots in the race. That’s always the goal when you don’t have a good qualifying session. The situation was looking really good for us before the rain came. We wouldn’t have had to pit before the end, there were probably four or five cars that we might have jumped if it had gone green to the finish. So Mother Nature doesn’t always play in your favor, but we got the race back under way for the fans under the lights, which is what matters. I’m happy we moved up but we would have liked to have been a little further up the grid when all was said and done.

Christian Lundgaard finished the race where he started in 19th and speaking following the race he commented saying:

It was a tough race. The whole race I was boxed in with a lot of different balances in the car and then changing the tools in the car, which makes one of them worse but doesn’t help the others. It was just super tough to work around and I was at the point where I just wanted to get the car home in one piece. We were the first car to be two laps down so there wasn’t much to play for.

Simon Pagenaud was 20th just ahead of Callum Ilott, Ed Carpenter and Conor Daly while Jack Harvey was 24th just ahead of Alexander Rossi who suffered an issue with his car meaning he finished the race 34 laps down and speaking following the action he said:

“The weekend started out promising, but in the end it was a terrible race day. We had a good car, but ran out of fuel early and it took us 15 laps to get the car re-started in the pits. Just have to look forward to the next and finishing the season strong.”

Rinus VeeKay rounded out the order in 26th place. The next race, the Grand Prix of Portland is two weeks away and is the penultimate race of the season and right now as it stands there are just 58 points separating the top seven in the championship.