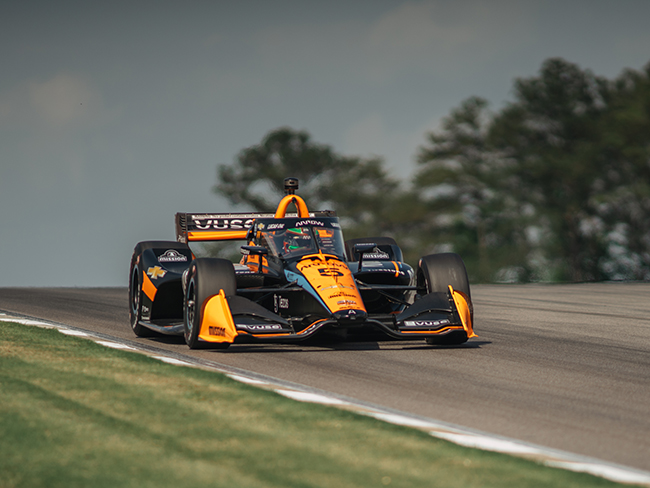 Arrow McLaren SP’s Pato O’Ward in the No.5 Arrow McLaren SP Chevrolet says it was not a bad day for the No.5 crew as he ended the day in seventh place with a 01:06.9838s and speaking following the action at Barber Motorsports Park, the Mexican commented saying:

“Not a bad day. I think there are a lot of little things that we can look into to prepare for tomorrow and for qualifying. Once there is more Firestone rubber down, it is going to change the way the track feels quite a bit. So Practice 2 tomorrow will be big in dictating what way we should go with the balance and see where we go from there.”

Felix Rosenqvist who ended the day in P13 said that the team had a few issues in the opening laps in the No.7 Vuse Arrow McLaren SP Chevrolet and speaking after setting a 01:07.3416s he said:

“We had some issues on the first couple laps with the tires so we had to come in. We only had one set of tires so it was kind of hard to know where we are at lap time wise. I thought the car felt pretty sporty. Today was a short session so I think we are good. Arrow McLaren SP will be strong tomorrow.”

“It was a good day and good to be back here at Barber Motorsports Park. It was also great to see Pato start where we left off last year. We left a bit on the table during the first outing on the track, just creeping up to it. I feel like we are in the window with the car. It’s the same with Felix, he got off to a quick start, but again had more in it on the first outing. From there on, we didn’t really have the tires to improve and neither did anybody else. I think this is a track that suits both of our drivers and I am excited to see what tomorrow brings. It will be a busy day tomorrow with two practice sessions and qualifying, so plenty of time to make the cars better.”