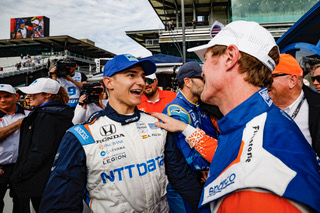 NTT DATA, the long-term sponsor of Chip Ganassi Racing and entitlement sponsor to IndyCar is set to leave the No.10 Honda ahead of the start of the 2023 NTT IndyCar Series season.

Paddock Eye has learned that NTT, who has been with Chip Ganassi Racing since 2013 will leave the team to sponsor Felix Rosenqvist at Arrow McLaren SP in 2023. It is expected that Rosenqvist will move out of the No.7 Chevrolet to make way for Alexander Rossi who will have Brian Barnhart on his timing stand next season following his arrival from Andretti Autosport over the off-season.

NTT was the primary sponsor of Felix Rosenqvist while the Swede when made his IndyCar Series debut with Chip Ganassi in 2019.

In related news, NTT IndyCar Series veteran Tony Kanaan is reportedly on Arrow McLaren SP’s shortlist for a fourth entry for the 107th running of the Indianapolis 500 presented by Gainbridge after the team decided not to run Kyle Larson or Kyle Busch as talks broke down.

McLaren Racing CEO Zak Brown has revealed that the team will make an announcement about a possible fourth entry for the Indianapolis 500 in the next two weeks or so.

Speaking ahead of this weekend’s U.S Grand Prix at the Circuit of the Americas in Austin Texas, Brown said that the team would only run a fourth entry in the 500 if it is beneficial for their three full-time entries.