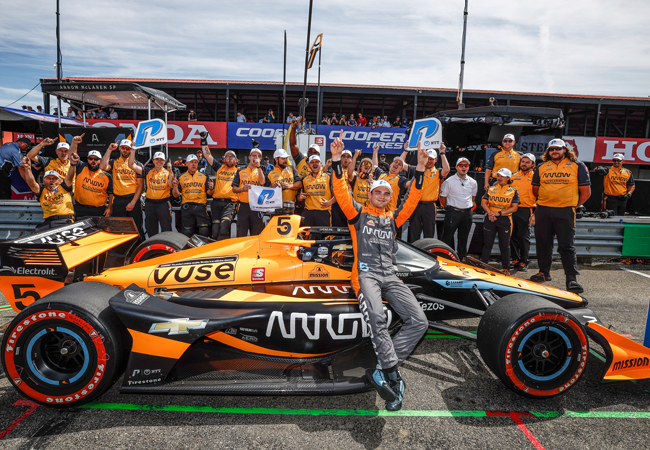 Arrow McLaren SP’s Pato O’Ward in the No.5 Arrow McLaren SP Chevrolet became the ninth different polesitter in nine races as he will start the Honda Indy 200 at the Mid-Ohio Sportscar Course setting a time of 1:06.7054s and speaking following the action he said:

“We are on pole here for the Mid-Ohio race! What a great race car and what a great qualifying session for us. Couldn’t quite get my laps perfect between Q1 & Q2, so I am glad I got it done in the Firestone Fast Six for myself and for the team. This is the best view you can have into Turn 1. It’s a long race tomorrow so I am looking forward to what the challenge will be.”

Felix Rosenqvist in the No.7 Vuse Chevrolet was fourth fastest with a time of 01:07.2163s and speaking following the action he said:

“Solid day… In Q1 we had the best time and almost the best time in Q2. I don’t know, I just felt we didn’t really make anything happen in the Firestone Fast Six. It’s a good day when you are disappointed with fourth. Congrats to Pato for piecing a good one together in the Fast Six. We have to look at our approach in the Fast Six. It seems like we are really good at getting to the Fast Six, but when we are in it, we never really go further than P4. It’s a good starting position, and I think we have a very good shot tomorrow.”

Scott Dixon starts the race from fifth place in the No.9 PNC Bank Chip Ganassi Racing Honda just ahead of Simon Pagenaud in the No.60 AutoNation Sirius XM Honda.

Helio Castroneves starts P15 just ahead of Christian Lundgaard and Romain Grosjean. Graham Rahal starts the race from 18th just ahead of Takuma Sato while Devlin DeFrancesco rounded out the top twenty with a time of 01:07.6475s.

Will Power starts from 21st with a time of 01:07.5559s while Conor Daly and Dalton Kellett start the race from 22nd place and 23rd respectively.

I think we improved quite a lot. I did not maximize the red tire in qualifying. That’s something I really need to put my head into and figure out for Nashville. We do have a good race car. I think we can definitely have consistent pace and move forward.

Tatiana Calderon starts the race from 26th place just ahead of Chip Ganassi Racing’s Jimmie Johnson who completes the order.