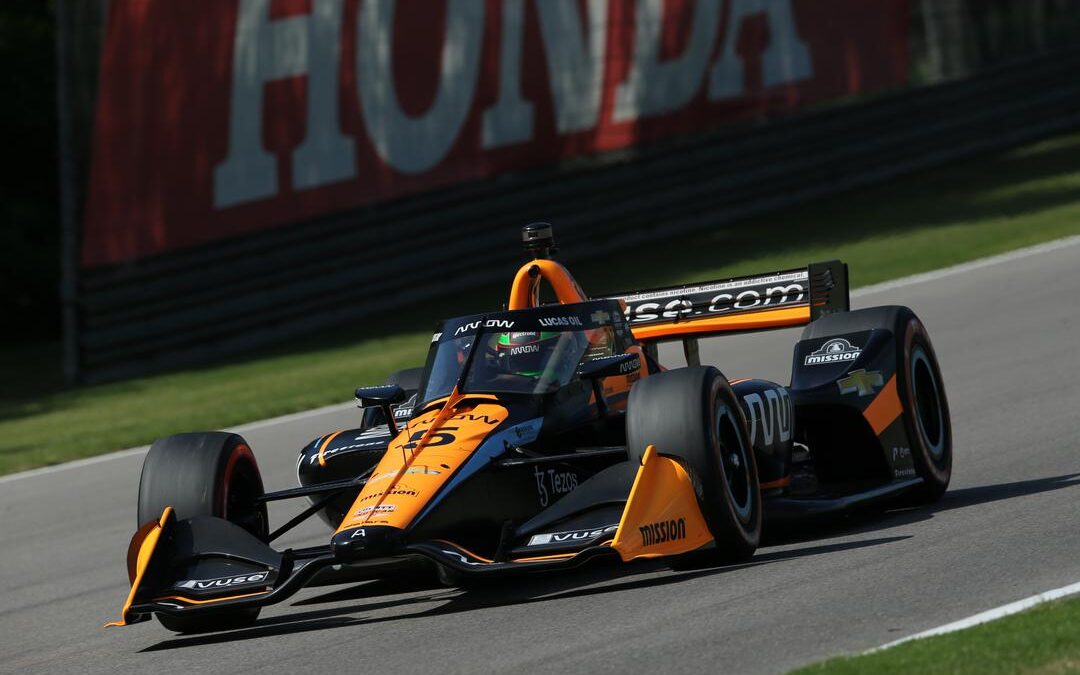 Arrow McLaren SP’s Pato O’Ward in the No.5 Arrow McLaren SP Chevrolet made up for missing out on the win at Barber Motorsports Park last season as he took victory here on Sunday following a great overtake on Ed Carpenter Racing’s Rinus VeeKay who had dominated the race.

Defending Barber winner and champion Alex Palou came home in second place in the No.10 American Legion Chip Ganassi Racing Honda ending the event just ahead of pole-sitter Rinus VeeKay who was left disappointed with his race. Will Power in the No.12 Verizon 5G Team Penske Chevrolet stormed through the field from 19th on the grid to finish the race in fourth place.

Six-time series champion Scott Dixon in the No.9 PNC Bank Chip Ganassi Racing Honda carved his way from 13th on the grid to finish the race in fifth place just ahead of Team Penske’s Scott McLaughlin while Romain Grosjean managed to hold off Graham Rahal for seventh although that will be under review by IndyCar race officials after Grosjean hit Rahal twice on track.

Alexander Rossi ended the race in ninth place while Colton Herta was left disappointed as he ended the race where he started rounding out the top ten for Andretti Autosport in the No.26 Gainbridge Honda after spinning following contact with Helio Castroneves.

Simon Pagenaud was 11th just ahead of Marcus Ericsson while Takuma Sato in the No.51 Nurtec ODT Honda was 13th just ahead of Josef Newgarden who lost the lead in the championship following a disappointing day at Barber Motorsports Park. The Tennesse-native ended the day just ahead of Christian Lundgaard and Felix Rosenqvist while Devlin DeFrancesco was 17th.

The start of the race was waved off as IndyCar was not happy with how the cars formed up going to the green but that was soon sorted out.

Jack Harvey was 18th for Rahal Letterman Lanigan Racing ahead of Conor Daly and David Malukas and Helio Castroneves. Kyle Kirkwood was 22nd just ahead of his teammate Dalton Kellett while Jimmie Johnson recovered from a spin following contact to finish the race in 24th place just ahead of Callum Ilott who rejoined the race after an off to come home in 25th following an exceptionally positive weekend for Juncos Hollinger Racing who ran inside the top-10 all weekend.

Tatiana Calderon rounded out the order in 26th place. What a way to start the Month of May! Next up is the GMR Grand Prix of Indianapolis on the IMS road course.