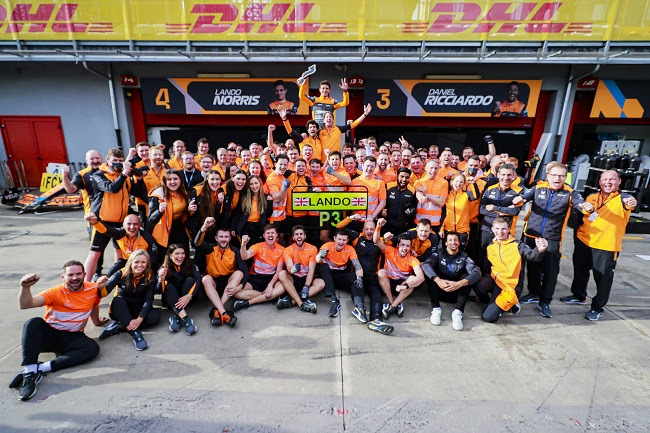 The McLaren Racing Formula One Team’s Lando Norris scored his first podium finish of the 2022 Formula One season at the Emilia Romagna Grand Prix in Imola on Sunday. Norris, who started the race in fifth place came home in third place, and speaking following the race he commented by saying:

“P3, what a result! We certainly didn’t expect that coming into this weekend, so I’m happy to be leaving with a podium. It’s been a tricky weekend, but the team recovered well to put me in a good position for today’s race. I had a good start and was managing my tyres to the end. At that point we were on for a P4, which would still have been a great result. We got a bit lucky with the issues ahead, but we did what we needed to do to be in a position to take that opportunity. Great work by the team at track and back at the factory, great pit stops and a great result. On to Miami!”

Daniel Ricciardo started the race in sixth place but finished the event in 18th place having been caught up in a first corner incident with Scuderia Ferrari’s Carlos Sainz and speaking following the race, the Australian said:

“It was a great result for Lando! However, it was one of those Sundays for me unfortunately. At Turn 1, I thought I got hit but it was actually me getting on the kerb. I then slipped off it and went into Carlos [Sainz], before being bumped by Bottas. We had a bit of damage and struggled for the rest of the race. It’s a painful one and it’s never nice to be involved in incidents. There’s not much more to say. Just one of those Sundays. We’ll celebrate Lando’s podium and learn what we can as we head to Miami.”

P3 for Lando today comes as the result of hard work and a well-managed strategy. He drove a great race today. After a good start, he worked very hard, looked after his tyres, managed the gap to the cars we were racing and put himself in the best position to take advantage of any opportunity that came his way.

“Unfortunately Daniel had a first lap collision with Carlos [Sainz] which damaged the car and his race was pretty much over, but he was able to provide useful information to the team to maximise our result.

“The performance we saw this weekend on a different track and in a variety of conditions confirms the potential of the MCL36 that we have been unlocking race by race. That said, we remain realistic about the work we have to do to close the gap to the front of the field. Also our pitcrew again delivered good pitstops.

“My thanks today to the entire team, here at the track and back home at the factory, together with our colleagues at Mercedes HPP. It’s been an intense first Sprint weekend of the 2022 season. We head home now to reset, analyse what we have learnt here and prepare for our first visit to Miami.